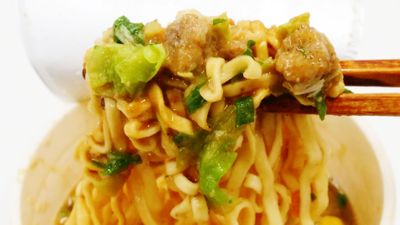 “ Cupnoodle Miso ” and “ Cupnoodle Shio ” have appeared since April 1, 2019 from Nisshin Foods. The soup that combines red and white rice miso based on the barley miso of 'cup noodle miso' is finished with a thick yet clean aftertaste, and the 'western style taste' cup 'cup' I ate it because I was worried about what kind of taste it was with 'Noodle Shio'.

This is how the cup of 'cup noodle miso' looks like. Although it is a standard menu of ramen, it has a short-lived miso taste of cup noodles even though it has been released twice in the past, but this “cup noodle miso” is a regular version of the popular mini-size. It is stated in the cup as 'the ranking first place that fits the rice ball'. This is the result of a survey conducted by Nissin Foods Co., Ltd., which actually had 100 men and women eaten with 'salt rice ball', 'cup noodle regular', 'curry', 'seafood' and 'miso'. Looking at the ingredients, the soup is made with 'powdered miso' and 'miso seasoning', and you can expect the rich miso taste of using red and white rice miso based on barley miso. Boiled meat is seasoned pork mince. 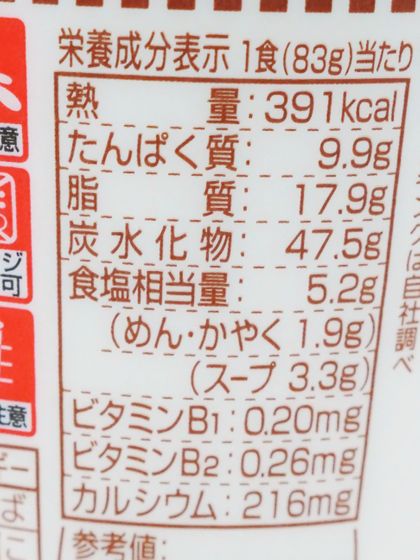 Add hot water and set the timer to 3 minutes. 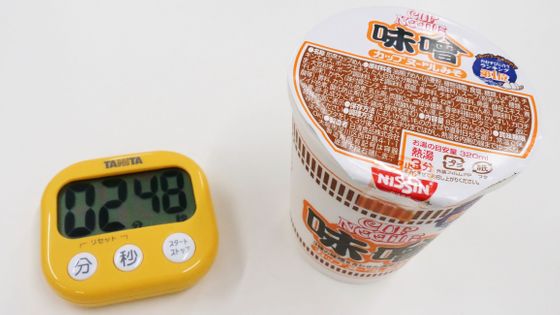 When I opened the lid after the timer rang, the smell of miso stood in the room. 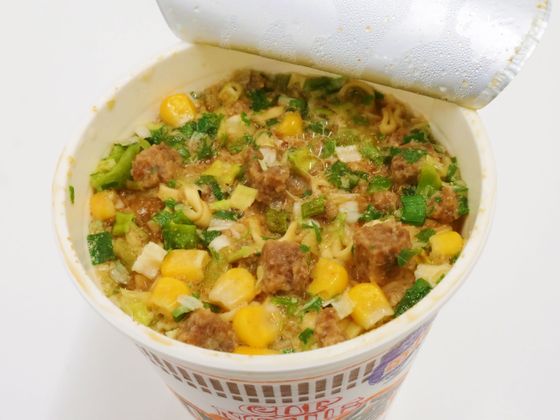 When you eat it, you can feel the fragrant smell of miso, the richness and the deliciousness of minced pork. Somewhat nostalgic taste of miso tasted excellent stability, and I was relieved to feel relieved. 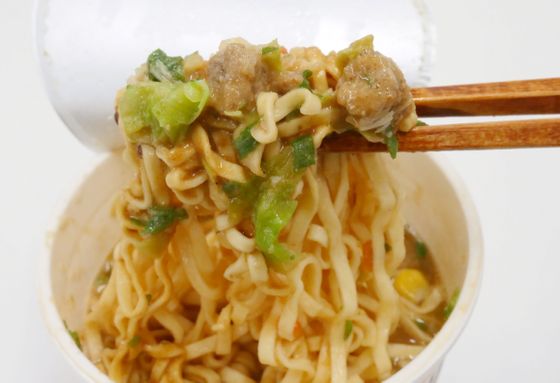 The taste of miso is just right, so I could eat it instead of miso soup, and I would like to eat rice ball and rice in the remaining soup to make it into ramen rice. 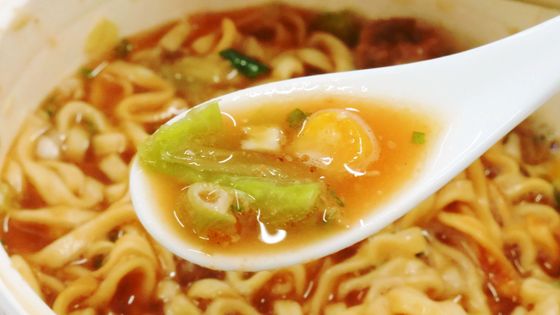 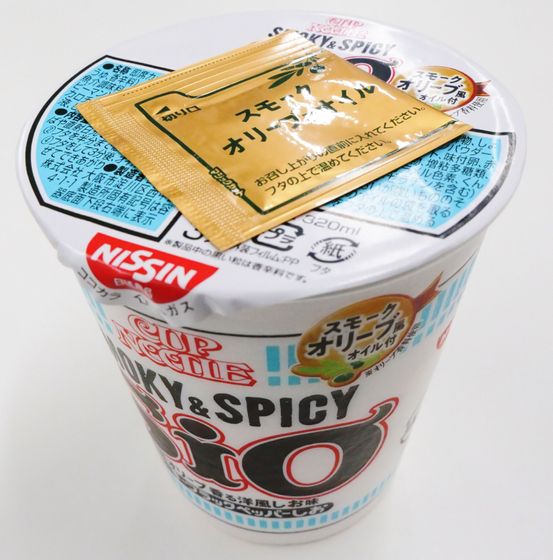 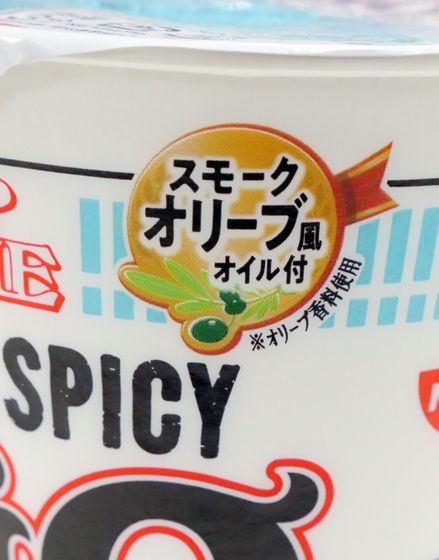 If you look at the column of raw materials, you can see that “Ayashi Minced chicken”, “Cabbage” and “Red peppers” are described as “Kayaku” and materials that show that they are not just salted ramen are used . While waiting for 3 minutes with hot water, remember to place a small sachet of oil on the lid and allow it to warm. 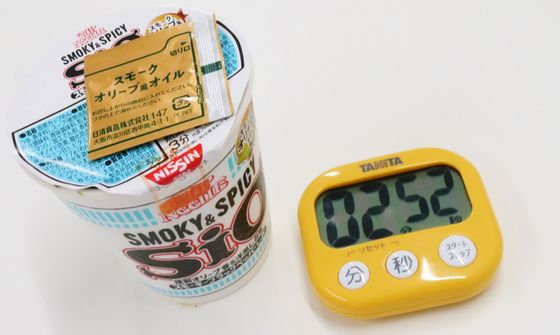 It's like this when I put the hot water and opened the lid 3 minutes later. Dice-shaped chicken mince and potatoes are included, and the red color of paprika and the yellow color of eggs are vivid to the eyes. 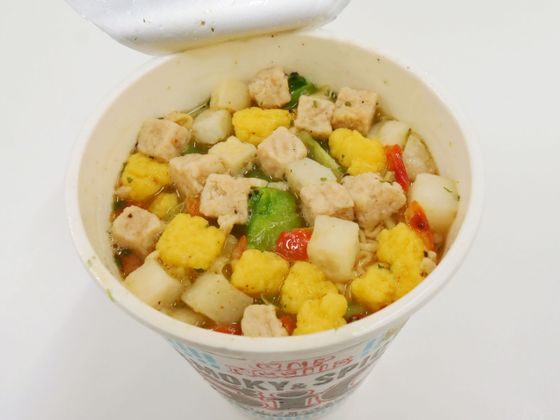 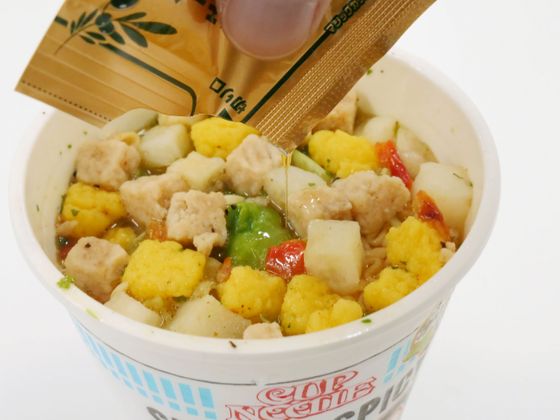 Stir well and you're done. 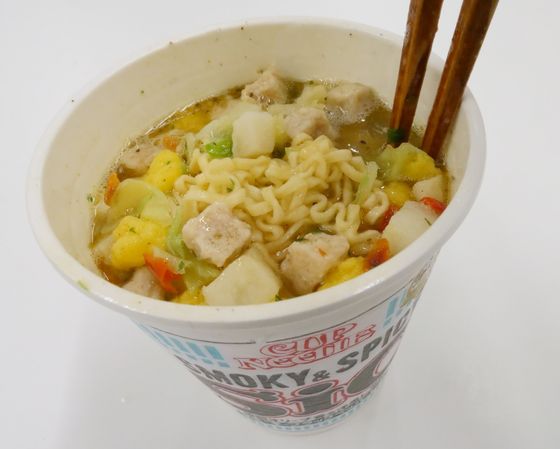 When I ate it, the spicy taste of chicken with smoky is complemented by basil and black pepper, and I imagined the taste of orthodox salted ramen from the simple name of 'Shio', but in the aftertaste The slight bitterness of paprika and the smell of olive oil were felt, and it was a Western-style taste like Mediterranean cuisine. 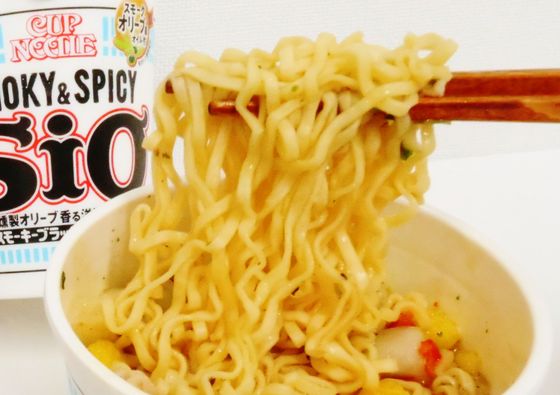 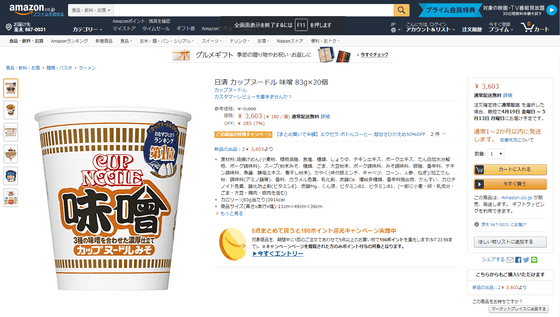