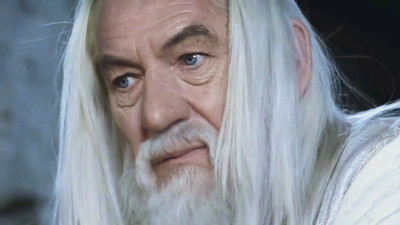 Ian McKellen, known for his “The Lord of the Rings” Gandalf and the “X-MEN” series Magny Toe, has been on the stage of theater since childhood, and has been frequented by the

Royal Shakespeare Company and the Royal National Theater. It is known as a well-known actor who has appeared without a doubt and won numerous awards. He was highly regarded for his acting ability and performance, and was appointed to the knight in 1990, and received the title of Sir. The Nerdwriter1 YouTube channel focuses on the 'eye' and explains in the movie what part of McKellen's performance is rated as 'a good actor,' especially 'a good movie actor.'

How Ian McKellen Acts With His Eyes-YouTube

The techniques of acting are, for example, changes in voice, body gestures and facial expressions.

In the movie 'The Lord of the Rings', McKellen places particular emphasis on acting, Nerdwriter 1 points out.

Gandalf is a central figure in charge of the morality of the story. He is also the person who most widely understands the importance of things happening in the play.

In other words, Gandalf has the role of having to convey a large amount of story information to movie spectators.

There are two types of characters that characters convey to the audience. One is the situation or outline of that person, and the other is how the character feels about having such information, or how important that information is to the main story.

On the other hand, when McKellen appears in the screen, the eyes are often close up. For example, Gandalf's eyes, who say, 'The ring is waking up to the voice of the master,' said Nerdwriter1, who is worried and ugly, and has something beyond fear.

The audience is pulled by Gandalf's emotions in order for McKellen to show the seriousness of the situation with his eyes, and Gandalf's feelings become as if they were feelings that they remember.

In order to immerse the audience more deeply into the story in the play, director

Peter Jackson has left McKellen as a guide for the audience.

Shots that reflect the reaction of the story highlight a series of important dialogues. Having an actor that can be explained by acting rather than by mouth is a great gift for the director, says Nerdwriter1.

For example, in a scene where Frodo shouted a decision to bring a ring to Mordor ...

Gandalf's emotions expressed at this time are complex things that mix love and fear. However, if this is spoken and spoken, the intention to express Gandalf's complex feelings in the heart is lost. In 'The Lord of the Rings', the eyes are often emphasized and projected to express not only Gandalf but also the emotions of various characters.

For example, even when Galadriel gives a test of determination to the members of the ring, a direction that emphasizes and reflects the eyes of everyone in conversation is adopted.

If you look at McKellen's performance in 'The Lord of the Rings / Two Towers', Nerdwriter 1 says that he is fascinated by the performance.

There are 40 muscles in the human face, all of which move together to create different expressions. In real life, we do not always consciously make our own expressions.

Of course, these technologies are not the only ones that make McKellean a good name, but acting by a great character such as McKellen makes the inside line in the story wider and deeper without the need for serifs. So, Nerdwriter1 explained.