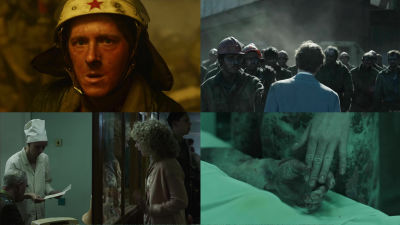 Why did the Chernobyl nuclear power plant accident occur in 1986? A trailer for " Chernobyl " focusing on is released. At the time of the explosion, there were people at the site who were at the expense of their own to handle the accident. Chernobyl focuses on such brave characters and has a story that reproduces the situation at that time. The scriptwriter is " Hangover !! Worst hangover in history, crossing the border " Craig Madin and the director is Johan Lenk of the popular drama " Breaking Bad " and " Walking Dead ".


Suddenly generated light outside the window.

A few seconds after the woman came into the room ...

People who do not understand what happened.

In 1986, an explosion occurred at the Chernobyl nuclear power plant No.4.

Fire engine rushing to the spot.

"What happened to this planet has never happened"

Neighbors started to evacuate 36 hours after the accident, and until then many people were living their normal lives without knowing the facts of radiation.

A large number of personnel will be deployed to halt the runaway of the nuclear reactor, and the human damage of the Chernobyl nuclear accident became the worst in human history.

People exposed to radiation and isolated.

State of the site

Although 5000 tons of sand mixed with boron were dropped from the helicopter for fire suppression and radiation blocking, it was later pointed out that the crew did not receive any special protective measures.

Where the people who took off their protective clothes headed ...

The figure of the person who was at the accident site.

The movie ended with the words "I don't know why this happened", but "it repeats again".

In addition, Chernobyl is scheduled to be released on the US cable television station HBO in May 2019.