Situations that sex, marijuana and discrimination jokes spread among Facebook moderators who monitor and delete victims of murder and violence 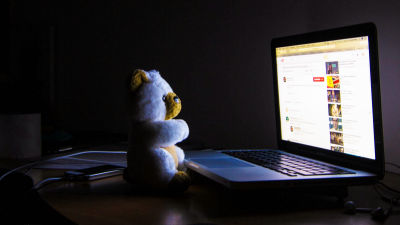 It has been reported that a moderator who monitors and deletes pornography and violent content on the Internet develops PTSD. A report newly made by The Verge of foreign news media reported on the current status of Facebook moderators, and employees who develop panic disorder or employees who came to believe in conspiracy theory and began carrying guns , And the presence of employees who regain their calmness by indulging in sex or marijuana in the workplace are clarified.

The secret lives of Facebook moderators in America - The Verge
https://www.theverge.com/2019/2/25/18229714/cognizant-facebook-content-moderator-interviews-trauma-working-conditions-arizona Casey Newton interviewed former employees who worked at a company called Cognizant who undertook the task of monitoring Facebook contents. Cognizant's employees often have to see images that encourage killing sites and discrimination, gradually have problems with the spirit, and many employees are forced to quit the company.

For example, Mr. Chloe, a former employee, said someone had been stabbed a number of times by a man and watched a movie that was murdered, tears stopped, breathing became difficulty, and then he suffered a panic disorder. In addition, there are some employees who changed their way of thinking while watching movies of the conspiracy theory, that some people began to question the Holocaust and said that " America's simultaneous terrorist attacks are no longer considered terrorist attacks" Some employees say that they got to sleep by placing a gun at the bedside.

Miguel, a former employee, works to find and remove discriminatory remarks, but if there are things that contain discriminatory jokes in the content that can be seen, images of men sexually interacting with farm animals , There are also images of murder taken by cartel of drugs. The most common is the image of bullying and hate speech, Instagram that is easier to create a pseudonym account than Facebook It is easier for Instagram to share videos of sexuality, nude and violence than Facebook, Miguel says. 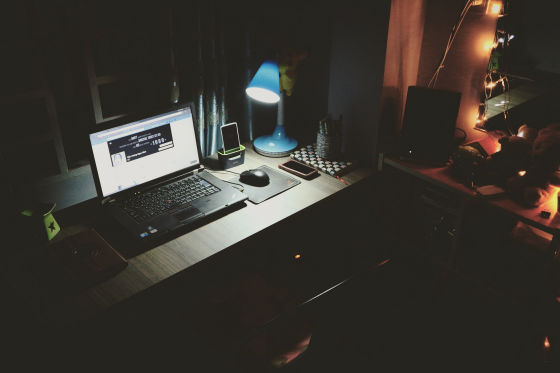 Li, a former moderator who worked for a year at Cognizant, said that the use of marijuana was common enough to "I can not tell how many people were sucking marijuana", "I brighten the atmosphere of my workplace It explains that employees were telling them to compete for discriminatory jokes. Mr. Li who is an ethnic minority seems to have been often used as a joke's story, but Li himself seems to have recognized such a joke as "a good intention". Li who got accustomed to the environment that it is only to hurt himself to produce laughter, but one day he said that he took a discriminatory joke like talking at his workplace when he was at a grocery store about. "I got it, this was a grocery store." Li, who realized that I should not speak like this, gradually became worried about my mental state and retired in a year after I began working.

Cognizant's employees are signing a confidentiality agreement that they do not talk about what they are working for for Facebook when working, which is intended to protect employees, but if contractors are Facebook users It is also to prevent sharing personal information of outside with the outside. However, due to this confidentiality agreement, employees are unable to speak with their families, lovers, friends about their work, and they seem to be naturally away from their close friends. As a result, we will share the painful experiences experienced at work with colleagues in the workplace and the emotional connection like " trauma bond " will become stronger. In the workplace, black jokes about suicide flutter, it is said that alcohol and marijuana are used to settle emotions, and sex acts are done in stairs and nursing room.

Facebook's Mark Zuckerburg CEO announced the expansion of the community management team on May 3, 2017, promised to increase the number of moderators to evaluate the content and report on what violates Facebook's violence policy. By 2018 by criticism of violent content published on Facebook there are over 30,000 employees in charge of security and security, but it is said that half of them are content moderators. Some of the moderators employ staff full time by Facebook, but Facebook is relying on contractors for most of it. The median annual salary of Facebook employees is 240,000 dollars (about 26 million yen), while the annual income of the employees of the contractor company is about 28,800 dollars (about 3.2 million yen). Newton has said that Facebook can generate a lot of profit, and in 1997 CEO Zuckerburg warned investors "investment is affected by security investment", even though investors warned , I point out that Facebook's revenue is up 61% over the previous year.

The "moderator" job has the image of staring at the computer for hours in a dark room and keeping watching cruel movies, but the actual Cognizant is a sunny and vibrant environment, on the surface like a Facebook office I say that there is an impression. However, while Facebook employees work at their discretion, Cognizant employees have two 15-minute breaks of the day and a 30-minute lunchtime, and a 9-minute "wellness time Just being given. Wellness time is for employees who feel that they need to leave their desks from mental suffering but because the toilet rows during breaks are so long that people using wellness time for toilet breaks It is said that it is. Also, due to the high turnover rate, most people are not assigned permanent desks. Mr. Chloe who saw the image of a person being stabbed and repeatedly stabbed with a knife, like many moderators, stopped working in a year, but then suffered from PTSD afterwards. When I went to see the movie "mother!" With my mother a few months after I quit my job and when I was sleeping at home, I heard the sound of the machine gun and caused a panic attack. 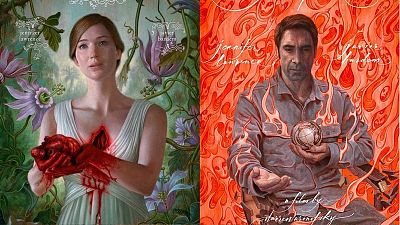 When Newton met with Facebook and Cognizant executives, five Cognizant employees talked about the work under the presence of their boss, but while admitting that "it is a difficult job" they are "safe It is said that I feel that this work is supported by Cognizant and has an opportunity to get a better salary. " Mr. Brad, a policy manager, said, "Most of what we see is a gentle thing like" a person who voices ", and Newton was asked" "Cognizant's work is mental health There is a risk of "Do not exaggerate" and that he warned.

Newton's moderators said that everyone was proud of their work, seriously grasping the importance of work and wanting "Facebook employees to treat themselves equally as colleagues" Says. Work as a moderator on Facebook as well as on YouTube and Twitter is important. Even though it is said that artificial intelligence is developed, based on the current situation that most people can not help relying on the power of human beings, Newton operates the content moderator like a call center for cost reduction I was doubtful about being done.

On February 25, 2019, Facebook posted an article called "Our Commitment to Our Content Reviewers" in the news room. In relation to the relationship between partners who evaluate content, we mention that "we understand that there are many doubts, misunderstandings, accusations in Facebook content evaluation practices". 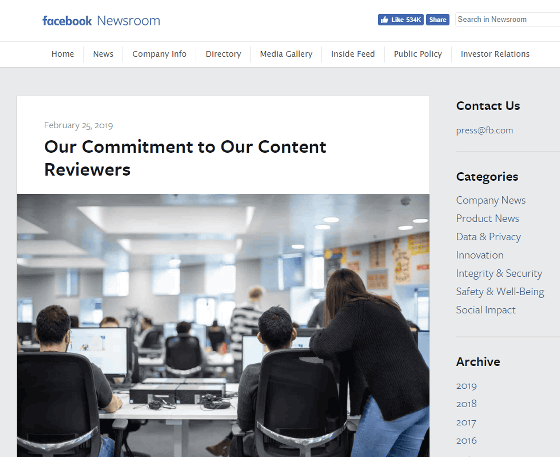 In this context, Facebook is "clearly contracted", "being inspected regularly" "weekly phone calls, regular visits, monthly or quarterly business evaluation, workplace environment and wellness It is clearly checked whether support is being done ".

In addition, Facebook publicity announces Cognizant's statement "We are providing a healthy, safe, positive work environment". In response to The Verge's article Cognizan has investigated problems at a specific workplace, offering 24 hours a day of telephone support, providing a comprehensive wellness program including online counselors, a personnel consultant developing next-generation wellness support We have announced a partnership with.