Techniques have been developed since ancient times to make things visible in places that can not be seen, such as a curved mirror on a road or a side mirror of a car, beyond the wall or the corner of a corner. However, as it is a periscope of a submarine, items that make use of high-sensitivity sensors and high-tech equipment are complicated and the cost is too high, so application to real life is difficult. Meanwhile, researchers at Boston University reported that they succeeded in taking images taken on invisible positions by using ordinary digital cameras by analyzing "the shadows appearing on the wall " I will

Researchers at Boston University installed a digital camera in front of the white wall and placed the LCD screen so as to face the white wall as shown below. In addition, a wall is placed between the camera and the image, so that images are not reflected on the camera by any chance. 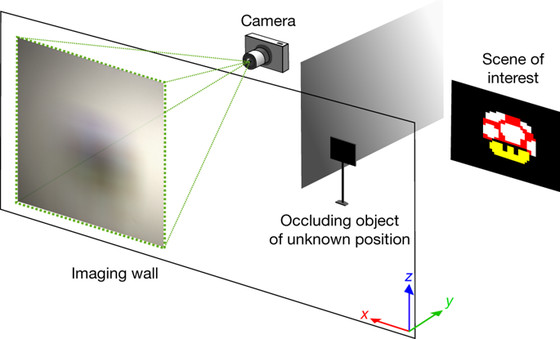 The wall looks white because the wall scatters the reflected light at all angles and all the light colors are mixed. And the light emitted from the LCD screen beyond the wall also hits the white wall, and the "penumbra" of the image is projected on the wall. The research team carried out a long exposure shooting and caught the penumbra reflected on the white wall with a digital camera.

Since the camera does not know where the LCD display is, analyze the white wall and guess where the penumbra is projected. Then, by identifying the three colors red, green, and blue (RGB) from the vagrantly shadow shadow and analyzing by the algorithm, the image displayed on the LCD display is reproduced.

The following image summarizes the appearance of actually reproducing. The leftmost image is the image displayed on the LCD display, the penumbra detected the second from the left, and the image output as a result of superimposing the analysis on the right three images. As you repeat analysis, you can see how precision is rising. Especially, the shadow of the boy who covered the mushroom and the hat is almost no different from human's eyes, but it seems that the mushroom and the boy are already distinguished by the first analysis. Vivek Goyal, one of the authors, says, "Our technology uses traditional hardware, you may be thinking about the possibility of preparing an application for mobile phones.The camera we used There is no fundamental difference from the mobile phone camera. " "One of the most likely uses of this new technology is autonomous driving vehicles.It can be used to judge whether there is a child in the blind spot of a parked car or to know the information of the part invisible to the user at the intersection of the city It might be optimistic, but it is not unreasonable. "