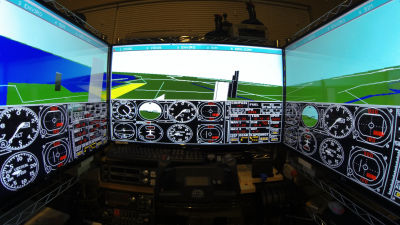 Piekarski's flight simulator created by remodeling the Microsoft Flight Simulator can be understood in a single shot by watching the following movie.


Some movies were taken from a position closer to the monitor. We can reproduce the wide field of view seen from inside the cockpit using 3 monitors, and you can see that the joints of the monitor are seamlessly displayed without discomfort.


Piekarski said that he introduced Microsoft Flight Simulator version 4 (FS 4) from his acquaintance at the time of release. Piekarski says that he was moved by a simulator that can fly around as if he was riding in a 3D space as if he were on an aircraft, he said that he began to be interested in 3D graphics from there. However, Piekarski at that time did not have a 14 inch CRT monitor deer, which makes it impossible to secure a small field of view in front so it is said that it was "very difficult" to fly aircraft with a simulator. Since the monitor is small and the left and right sides of the aircraft can not be seen, it seems that there were many cases where I missed an important signature. Piekarski, who was aware of the fact that the monitor was too small from that time, he searched about commercial flight simulators, but they seem to have been too expensive to buy them individually. A few decades later, in 2017 Piekarski creates an immersive indoor flight simulator using three 42-inch monitors.

You can see pictures of immersive indoor flight simulator created by Piekarski on the following page. In order to play FS 4 with this immersive indoor flight simulator, Piekarski used the DOSBox of the emulator. Although the resolution of FS 4 is 640 × 350, it is said that "it is surprisingly superb even at low resolution" when displayed on a full HD (1920 × 1080) monitor, "What was such a wonderful simulator was" I did not notice it, "Piekarski wrote.

Also, since emulator DOSBox supports emulation of old analog PC joystick, it seems that it was also possible to play FS4 with control stick and throttle lever. At this point, "Although graphics are not that much, it worked at a smooth frame rate and it was pretty cool," says Piekarski.

However, since FS4 released in 1989 supports only one monitor, it used only one of the three monitors of immersive indoor flight simulator made by Piekarski. Although FS 4 supported multiplayer mode with RS - 232 cable, since DOS machine of 1989 did not support network function etc., displaying simulator images on multiple monitors is "desperately I thought. " FS 4 does not use much OS, and it seems that all data was written directly to memory in the state that it is not protected. Therefore, it is assumed that XYZ axis information on aircraft in FS 4 and pitching value of heading can be identified from memory dump . Therefore, by specifying the memory location where the state of the aircraft is stored, it is possible to intercept such information by the emulator, transmit the UDP packet to the other instance via the network, and write the information to the same memory location I got to be able to do it, Piekarski.

In addition, there is a keyboard shortcut in FS 4, and you can switch viewpoint from the front to the left and right using it. Changing the field of view is only when pressing the keyboard shortcut, it can not be changed to a specific angle. Adjust "view from aircraft" which displays on three monitors in a form combining this with data on the status of aircraft acquired by memory dump. However, as there was a large gap in the boundary between monitors, it seems necessary to fine-tune the left and right images. Piekarski wrote a script that can automate the placement of the video output to the three monitors using wmctrl and xdotool and send the necessary keystrokes so that you can play FS4 with your own flight simulator It is said that it came to be.


In addition, Piekarski creates a DOSBox that puts his own patch so that FS4 can be played with immersive multi display and publishes the source code on GitHub. 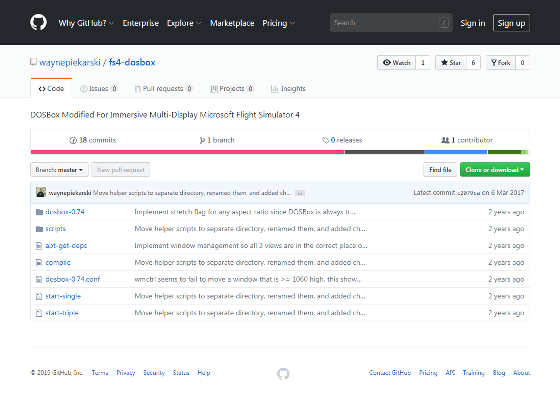 In addition, the data of FS 4 can be downloaded from the following page. ·bonus
It might be an unusual example to create your own immersive multi-display & scripts like Piekarski, but for players of " Ace Combat 7 Skies · Unknown " released on January 17, 2019, There are also people who pursue and purchase JHMCS plus a sense of presence.