Everyone admits that Google, which develops a wide variety of services including search engines, is one of the world's largest internet companies. To the extent that the verb " google " " guguru " is settled, the existence of Google is deeply penetrated into daily life. Such a Google "existing alternative to God exist" but the idea was Konan Women's University Faculty of Letters, media representation, Department of editing, Internet research seminar 1 graduating class of, the Chrome extension to produce a Google search as a religious ritual "Google deification kit" I announced it as graduation production, and I summarize the history of production etc in my graduation thesis. Editor · Internet research Seminar belonging to seminars Focus on "search" that is closest to everyday life in the services provided by Google, in order to express the idea of "deifying the Google". The author wrote: "I apply this" search "acts to everyday and customs in God and religion, apply to" prayer "which is an act of seeking salvation and answers, and" search "like a religious ceremony It is a starting point for work creation to think about ways to make google deified by directing it on. " 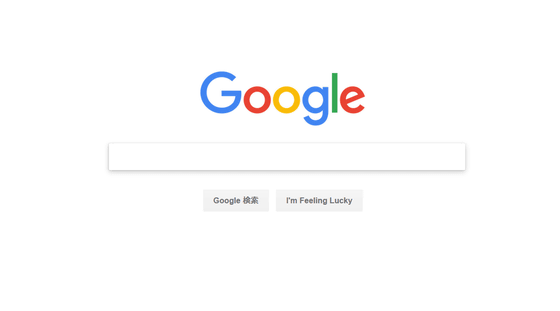 As a concrete method of expressing Google as God, the thesis authors first explored while making video works and exhibitions. And he seems to think that it can be directed by Chrome extension function which is Google's web browser. So, first of all, the authors summarized the elements to be expressed in three points, "visual element", "auditory element" and "self belonging feeling".

"Visual element" visually explains and expresses God and religion, such as art and decoration seen in religious art, so that many people understand how god and its power are amazing. "Auditory element" means to experience things that do not exist due to physical elements other than visual, such as religious music. And "self-attribution" is an active element for users to immerse in experience. In the thesis it is explained as follows.

Self-affiliation means that there is no time lag in the result of the user's action appearing on the screen and it is possible to manipulate at will, the boundary between the real world and the world beyond the screen disappears, and as a result It is a feeling that the screen image feels like a part of the body.


Based on these analyzes, several prototypes of "Google deityization kit" were created. In prototype 1 that was first produced, the colors that change concentrically are set as the background image, and the sound effect of the TV animation " JoJo's Bizarre Adventure " flows as a search element and page update as a sound element. In addition, a golden hindlimb is attached to the mouse cursor, giving the user a sense of self-attribution. However, from this prototype 1, problems such as design, such as "you can see the image joints in the background image when scrolling" are discovered. Moreover, it seems that there is a problem that it feels uncomfortable when the same sound flows repeatedly during the search. Prototype 2 produced based on the problem emerging in prototype 1 says that instead of "making google a god, the operator feels like a godly versatility and almighty feeling, I made it with the approach of doing illusion that it is God, or God. "

According to the author, the background image is based on the idea of getting a versatile sense from the illusion that the mouse cursor is applied to the whole image and only the mouse cursor moves within it. In addition, it seems that the cursor decorated late with the actual cursor has pulled out omnipotence from the operation accompanying it. Furthermore, in order to strengthen the sense of self-affiliation, the author also produces "a mouse stalker that erases the presence of the mouse cursor and strengthens the feeling of operating with his hands and tools". Instead of an arrow mouse cursor, hands with ordinary hands or flashlight ... ... We also have prototypes using images of the mouse itself grasped as a cursor. It seems that the prototype group devised this mouse cursor received high evaluation also when it was announced in seminars. Works produced based on these prototypes are "kami_mouse" and "bannou_zennou". "Kami_house" is "I made a god from a symbolic part by mainly using mouse stalker, background image, voice and incorporating religious art into Chrome extension". The mouse cursor will be a god depicted in " Creating Adam " in the Vatican City · Sistine Chapel , and the background image will be changed like a stained glass with Google logo marks. In addition, it seems that the specification of the church bell sounds every time the page changes. And "bannou_zennou" belongs to a large number of mouse cursors made in prototype 2. It seems that it is possible to eliminate the boundary of the image caused by the scroll in order to solve the problem caused by the prototype. 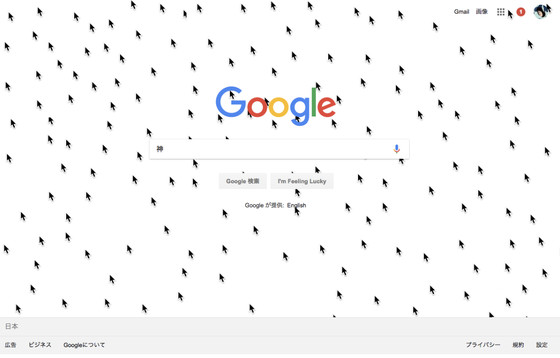 While creating a work so far, the authors of the thesis stated that as "post production" I felt that "whether I could sublimate to an existence that respects Google changed depending on the feeling of personal use," while "using Google As a real feeling, I felt that religious art related to existing religion is helping to make Google exist as God, I seemed to be successful on the production side, "he confirmed the success of the" Google Deification Kit " doing.

On the other hand, the authors point out that the versatility and the almighty feeling obtained by the "Google deification kit" will cause the possibility of giving birth to a pride and harming other people, "The existing god polytheism and monotheism I think that the idea of limiting myself for justice is important based on the idea of "

In addition, "Google deification kit" is not open to the public at the time of article creation.