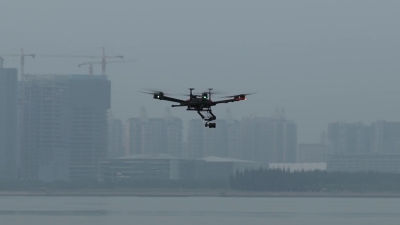 Events where many people gather, such as Christmas and New Year party, are good targets for terrorists and police authorities are required to have a strict warning posture. The US police revealed the first time that the drones will be deployed in the air to protect the celebrating New Year.

The New York City Police announced to introduce a "counter droning technique" that deploys a drone that patrols with a camera from the sky in preparation for the New Year party celebrating the New Year held at Times Square every year. This counter droning technology is the latest technology developed for large-scale events, and it is said to be anti-terrorism technology to monitor from the sky with airplanes and helicopters. We will monitor whether terrorism will be done from a position closer to the crowd than an airplane or helicopter.

In order to prevent terrorism similar to the gun shooting incident that shot a field event over Los Vegas in October 2017 and gave 59 people to death, the police authorities and the hotel staff cooperated in this case It seems that it came and it will be put to practical use at the New Year event of 2019 at last from the air. More than 37,000 police officers will be deployed to prepare for a large number of people gathering at Times Square to celebrate the New Year. New York City Police Commander James O'Neill said that there is not any specific evidence that the threat of terrorism is approaching on New Year's Eve, "While you see a police officer with a lot of equipment and a long gun While there are many visible security measures, there are also invisible security measures never seen. "