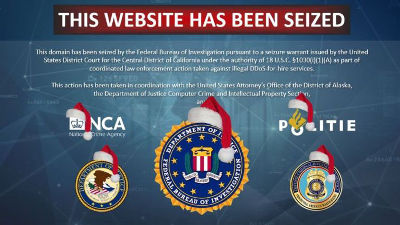 Announced that FBI has forced FOMI to close 15 companies that undertake a " DDoS " attack that uses a lot of remote machines to overload the network and drive the service down. For the "processed" DDoS contracting service, the FBI page wrapped with Santa Claus' hat was displayed as if celebrating early Christmas.

FBI kicks some of the worst 'DDoS for hire' sites off the internet | TechCrunch
https://techcrunch.com/2018/12/20/fbi-ddos-booter-sites-offline/

Federal prosecutors in the United States prosecuted Matthew Kurrell and Euan Martinez as being managing a DDoS contracting service contracted by customers from DDoS attacks.

The existence of these services that makes it easy to set up DDoS attacks on specific sites is no longer a threat at the national level, and FBI is an IT company like Google and Cloudflare and the British Criminal Organization Crime Bureau (UK) NCA) and the Dutch National Police (KLDP), and so on.

FBI with international investigation cooperation succeeded in identifying 15 services contracting DDoS and has already closed the service. Sites that were closed by FBI were downthem.org , netstress.org , quantumstress.net , vbooter.org , defcon.pro, etc. When accessing those sites, the FBI logo wearing Santa Claus' hat was posted It is said that the special page was displayed, but at the time of writing the article Santa Claus Cap has been removed. Although DDoS contracting service seems to be used also for the purpose of checking the resistance to mass access of its own service by a small number of customers, basically it is intended to intentionally obstruct services of competitors etc. It is being used.

Gaming related services are representative of enterprises affected as targets. In the past, Blizzard's Battle.net and Final Fantasy XIV game servers may have gone down.

Also, it is pointed out that attacks targeting financial institutions such as banks are occurring frequently. According to Richard Jacobs of the FBI New York branch, there are companies that have been exposed to attacks by more than 100 financial institutions such as banks and securities companies, and paid money on condition that the attack was canceled.

According to the US Department of Justice, Downthem, a representative of DDoS contracting service, had more than 2,000 customers and repeated attacks over 200,000 times. Besides DDoS contracting services, cyber attacks such as DDoS attacks using botnets are frequently conducted, and it seems that there is still a lot of continuing chaos between attackers and crackdowners.