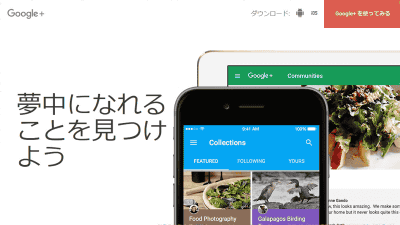 Google+, which had already announced the termination of service, will be shut down in April 2019 four months earlier than planned. About 52.5 million Google+ users may have been affected, according to Google, due to a security risk that privately-set personal information is leaked.

When announcing the end of the Google+ service in October 2018, along with the reason "The use of the service is sluggish", Google released a "bug where personal information of secret setting of a maximum of 500,000 users is released I found it. "

Another 500,000 people leaked out of Google+ is due to service termination, another reason is pointed out due to poor use - GIGAZINE According to Google, when updating in November 2018, we found a vulnerability in Google+ API that risks the leakage of new personal information of more than 52.5 million users. Due to a bug in this software, even if the user's name, e-mail address, occupation, and age are set to "non-disclosure", it seems that they were in a state that they could be accessed from third-party applications. In addition, it is said that the process of informing the user about the possibility of being influenced is in progress from the Google side.

In response to the discovery of a new vulnerability, in order to make Google's API shutdown faster, we changed the timing of the Google+ service to 4 months ahead of the original schedule and changed it in April 2019. For Google+ users, we will offer the opportunity to download data safely and transfer it to another service over the next few months.