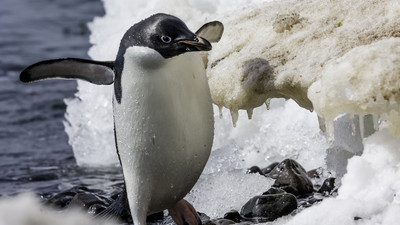 The Atlantic Meridional Overturning Circulation (AMOC, Atlantic North-South vertical circulation) flowing from the Southern Hemisphere to the North Atlantic Ocean is a large ocean current carrying a considerable amount of thermal energy, warm seawater flows northward in the Atlantic Ocean, cold deep sea water flows It flows southward. When the flow of AMOC becomes strong, it is said that a large thermal gradient is created in the ocean, which greatly affects airflow, climate and sea level in the northern hemisphere. AMOC is also the largest carbon dioxide absorption source in the northern hemisphere. The research team drilled a layer of ice in five places in Antarctica. I looked at the layer of volcanic ash sandwiched between the ice pillars to specify the year and year, and analyzed the isotope ratio of the water contained in the ice to measure the change in temperature. We conducted a similar survey in Greenland and compared the temperature data on the Greenland with the temperature data on the Antarctic. The results conclude that the rapid climate change that occurred in the North Atlantic region also affected Antarctica on the other side through AMOC change. The research team also said that the rapid climate change took place about 25 times between 100,000 and 200,000 years ago. Christo Buizert specializing in climate change at Oregon State University says, "The North Atlantic is sending messages to Antarctica on two different time scales." According to Buizert, when AMOC gets stronger and the North Atlantic becomes warmer, the temperature of other oceans, which had been deprived of a large amount of heat energy in the North Atlantic Ocean, declines and the south pole is expected to suddenly cool down due to the changed air current. After that, due to the slowly changing oceanic change, it is believed that the Antarctica will be further cooled by about 200 years. When Greenland warms under the influence of AMOC, the climate of Antarctica fluctuates twice with a span of about 200 years. In a paper published in April 2018, it was pointed out that "the speed of AMOC flow has been decelerated by approximately 15% over the past 150 years" compared to 1500 years ago, and AMOC's weakening has led to Asian monsoon Evidence suggesting a strengthening of the airflow pattern, a change in the airflow pattern, and a decline in carbon dioxide absorption capacity has also been found. Atmospheric scientist Justin Wettstein says, "Our world is now known to have global warming trends, the regional climate change will depend on how the atmosphere and ocean circulation affects It depends on whether you do it or not. "

It is known that the AMOC was extremely weakened and the North Atlantic became cold as it is now, from 200,000 years ago to 100,000 years ago which corresponds to the last glacial age. "The AMOC is weakening due to global warming from Greenland and the melting of ice, which means that it is now the stage where the message of climate change is being delivered to Antarctica along with the cooling of the North Atlantic Ocean "I commented.