Automation by AI does not necessarily result in a decrease in employment, on the contrary there is a possibility that employment will increase 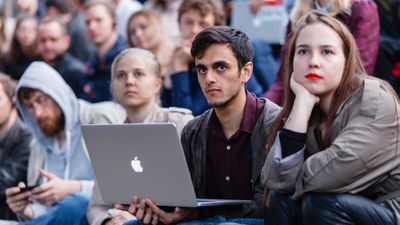 by Strelka Institute for Media, Architecture and Design

Many workers have concerns that "AI, which has developed rapidly in recent years, will automate many tasks and eventually reduce employment". However, automation of labor does not necessarily lead to a decrease in employment, and there are also claims that sometimes techniques for improving productivity may lead to an increase in employment.

How AI automation could boost employment: The role of demand - Bits and Atoms
https://bitsandatoms.co/how-ai-automation-could-boost-employment-the-role-of-demand/

In general, it is said that "automating labor reduces employment", but contrary to intuition, for some industries, employment has increased since technologies for improving productivity were introduced It is said that there is a fact. About this issue James Bessen , an economist from Boston University, has an important point as to how technology advances will have on consumer demand.

Employment in the manufacturing industry in the US has dramatically declined in the past few decades, but prior to that there was also a time when employment has increased with rapid technological evolution. This phenomenon in which employment has suddenly increased when technological innovation happens and employment gradually decreases afterwards is known as "inverted U-shaped pattern" and it seems to be found in many manufacturing industries.

Mr. Bessen created a model for the relationship of industrial demand to explain the inverted U shape pattern in the American manufacturing industry. The following graph shows the number of employment related to production over the past two centuries in the cotton products, steel materials and automobile industry in order from the top. The actual number of employed and the number of employees forecasted from Mr. Bessen's model developed by himself are almost linked, cotton products and steel materials draw a beautiful inverted U shape, and even in the automobile industry the mountain of increased employment has passed You can see it. 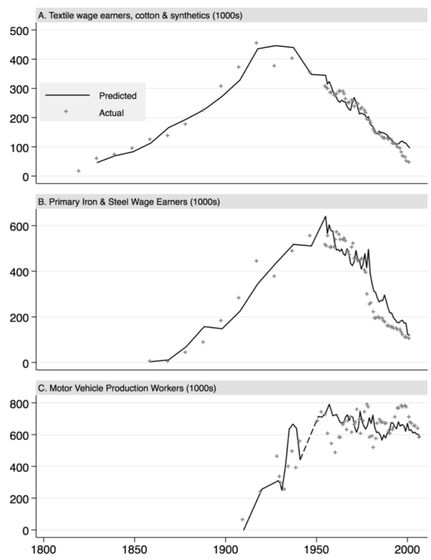 In the case of products with high price elasticity, if new technologies are introduced and production efficiency increases, the cost of producing a certain amount of product will decrease. The decline in production costs is reflected in the market as price declines and consumers are now able to buy a lot of products that "I want but can not buy enough because the price is high", the demand for products increased and the total production It is said that the result that it improves is born. If the demand increase exceeds the increase in production efficiency due to technological innovation, employment will increase at a speed higher than that even if progress in employment reduction due to automation of the production process is advanced, which is an increasing part of employment in the inverted U-shaped pattern.

On the other hand, the higher the production efficiency, the more difficult it is to reduce the cost, and the speed of the price decline. As a result, price elasticity of products tends to gradually decline, and it seems that even if production efficiency rises eventually demand increase that exceeds it will not occur. As a result, overall employment will decline, creating an inverse U-shaped pattern of employment reduction.

Past innovation in the cotton industry has automated 98% of the labor force to weave cloth during the 19th century. However, despite the fact that the labor force per production has decreased significantly, the actual workers have been increasing for decades during this period. While labor productivity of cotton fabric rose 30 times during the 19th century, Bessen pointed out that consumption of cotton cloth was 100 times. Since the cotton cloth had considerably large price elasticity at the beginning of technological innovation, it seems that it was possible to achieve both a substantial increase in production efficiency and an increase in the number of employment as described above. In the argument that AI replaces work, in many cases it tends to be talked about "AI is a magic bullet that greatly increases productivity" "AI is a threat to deprive people's work." However, Mr. Bessin says that not only speed of technology change affects employment, but also "change in price accompanying the rise in production efficiency and change in demand due to the increase in production efficiency" must also be added and judged.

If the area where production efficiency increases by AI has large price elasticity, demand will increase as price decreases and production volume will be increased, resulting in more employment than ever . On the other hand, in areas where price elasticity is small, rising productivity by AI may lead to a decrease in the number of employment. Therefore, in order to understand the impact of AI on employment, it is essential to understand the change in demand caused by the increase in productivity. by A Health Blog