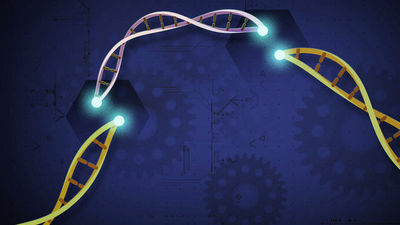 " CRISPR / Cas 9 ", a gene editing technique, is attracting attention as it can be used for treating genetic diseases etc. because it can cut specific DNA by programming in advance. A research result reporting that "Many people may cause immune reaction" against Cas 9 which is an enzyme used for such CRISPR / Cas 9 was reported.

Xconomy: Pre-Existing Immunity to CRISPR Found in 96% of People in Study
https://www.xconomy.com/boston/2018/10/29/pre-existing-immunity-to-crispr-found-in-96-of-people-in-study/

For CRISPR / Cas 9, the risk of " raising the risk of cancer " and " affecting an unexpected area " has been pointed out for some time. In January 2018, a research team at Stanford University School of Medicine said he had published a research result that "there are cases where many people have antibodies against Cas9".

As a result, 96% of the people 's blood showed immune responses to T cell - based Cas 9, and from 85% antibodies to Cas 9 were discovered. Studies by the research team at Stanford University School of Medicine found that antibodies existed in 65% of people, but no T cell-based immune response was confirmed. Research on genetic editing technology by CRISPR / Cas 9 is actively carried out every day, and practical application is approaching before the eyes. However, Schmueck-Henneresse says, "At this time we can not predict how the immune reactions that exist in the human body will have on CRISPR / Cas 9. The resulting effect will be the target of genetic editing It depends on various factors such as the method of use and the method of use, "he insisted that attention is needed in clinical trials.

As a method of avoiding the immune response to Cas 9 which was discovered this time, Schmueck-Henneresse mentioned to shorten the time that Cas 9 works as much as possible, and to administer drugs that suppress immunity to subjects. In addition, it is possible that an immune reaction can be avoided by editing the protein gene of Cas9.

Schmueck - Henneresse says, "There is no need to panic.The results indeed demonstrate the risk of applying CRISPR / Cas 9 to the human body, but immunogenicity is a problem in the field of gene therapy It is not what started today. "