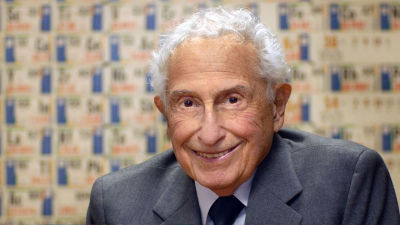 Mr. Stanford of Shinsky , inventor born in 1922, is not as well-known as a prominent inventor like Thomas Edison or Albert Einstein, but he has invented such an invention as " Edison of this generation " It is a person who has produced a lot. Smithsonian.com looks back on Mr. Stanford's achievements.

Stanford Ovshinsky Might Be the Most Prolific Inventor You've Never Heard Of | Innovation | Smithsonian
https://www.smithsonianmag.com/innovation/stanford-ovshinsky-might-be-the-most-prolific-inventor-youve-never-heard-of-180970276/

In 1922, Mr. Stanford was born among the Jewish parents who moved from Eastern Europe to America, Ohio Akron. After graduating from high school, Mr. Stanford began working as a mechanic in a factory that manufactures car tire type. In 1960, Mr. Stanford launched its own company, Electronic Conversion Devices (ECD) at Auburn Hills, Michigan, It will be widely noticed as an inventor in the field. Mr. Stanford has deepened her friendship with Nobel Prize-winning scholars such as Mr. Ijidor Izak Rabbi and Neville Mottt and has made many successes in the business world. In addition, Mr. Stanford will die at the age of 89 in 2012, but has acquired over 400 patents so far.

An episode that shows that Mr. Stanford had excellent foresight as an inventor was "I was planning a flat television to be used on the wall in the CRT TV era and I got a patent in 1966". That is why we had already planned a flat-screen television, which is not uncommon now, in 1966, which is the mainstream of a huge box-shaped CRT TV. In the same way, the patent acquired by Mr. Stanford in 1968 has been used in the manufacture of microchips for smartphones since 2000, and it is also used for further evolving computer memory technology .

Besides, in 1979 before patenting exhaustion of fossil fuel in earnest, we obtained a patent for mass-producing solar panels inexpensively, and in 1982 when the electric vehicle was at its peak in 1982, electric vehicles We have acquired a patent of a strong nickel-metal hydride battery with a high level of energy efficiency that can be used for Mr. Stanford, and Mr. Stanford is a man of foresight, firmly showing past achievements. Such biography of Mr. Stanford " The Man Who Saw Tomorrow: The Life and Inventions of Stanford R. Ovshinsky " was published in April 2018. Book authors Lillian Hodson and Peter Garrett tell some of Stanford 's unknown episodes to Smithsonian.com.

Mr. Lillian, who wrote biographies of numerous scientists and inventors so far, when he was first published his own books, he seems to have worked as a university professor at the University of Illinois. Mr. Lillian gave Stanford's biography that Mr. Peter Fritsch, dean of the department at the University of Illinois at the Department of History, handed that Mr. Lillian's book to Mr. Helmat Fritsch who is his father. Mr. Helmutt said that he worked for a long time under Mr. Stanford, and he contacted Mr. Lillian and asked him to write "Mr. Stanford's biography." Mr. Lillian decided to visit Mr. Stanford to write a biography, he said he visited the ECD in the fall of 2005, he says that "I imagined my imagination" to write a biography there. One of the things I saw when Mr. Lillian visited the ECD is the hydrogen driven hybrid Prius developed by Stanford.

Mr. Lillian met with Mr. Stanford, who seems to have had a need to learn a lot of new knowledge, but feeling that "I want to learn more", I never felt distressed by the situation I had to incorporate a lot of knowledge I have said that. 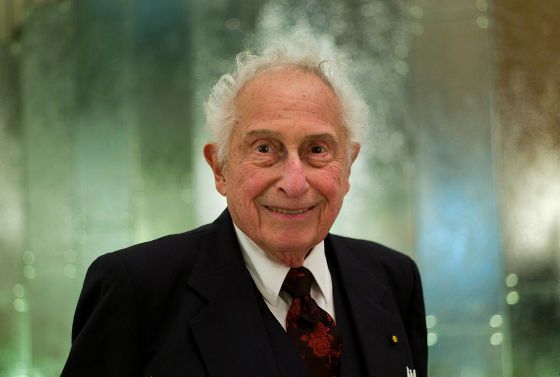 Mr. Stanford is interested in a wide variety of fields and has achieved high results in all of them. His career started with a mechanic, but I constantly improved my machine while doing my job as a mechanic, and within that Idea as an inventor has expanded Mr. Lillian points out. The first important invention for Mr. Stanford was a huge lathe. He said he named the invention "Benjamin Lathe" which is his father's name. This giant lathe is an automatic lathe used to cut and carve wood while the machine is moving a block of trees, from which it was clear that Mr. Stanford was particularly interested in automation It is becoming.

Mr. Peter who wrote a biography with Mr. Lillian said, "Mr. Stanford was trying to explain ways to simultaneously come up with new ideas on 4 or 5 different issues in the second half of his life, I had multi-tasking ability, he had multiple problems in the head, each connected problem, I found a connection that other people could not find from that, I thought of something new "It is revealed that Mr. Stanford's extraordinary multitasking ability created many inventions.

One of the achievements of Mr. Stanford as an inventor is the existence of his "obscinsky effect" named after him. This is to create amorphous substances such as thin glass films by increasing the voltage current. For example, although it is a flat-screen TV that became mainstream in modern times, it seems that this can not be made as compact as this without an amorphous semiconductor made using the obscinsky effect. It was thought that only the crystalline material could play the same role as the amorphous semiconductor fabricated using the obsin ski effect until the obscynsky effect was discovered.

Mr. Stanford found this Oblixworth effect and got a patent in 1968. In discovering the obscinsky effect, Mr. Stanford said in an interview with the New York Times, "I will be able to make a TV that can be painted like a picture on the wall," already thin I was foreseeing the birth of TV. 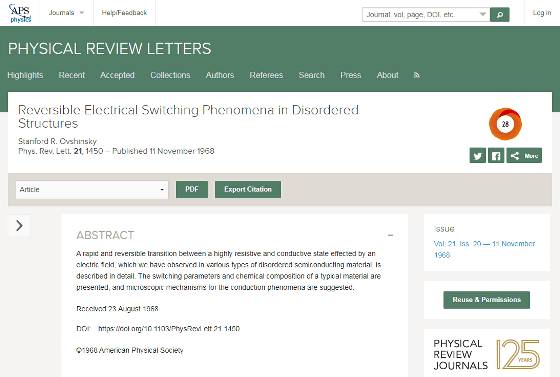 In 1966, Mr. Stanford got a patent on phase change memory . In phase change memory, either electric pulses or laser pulses are made to flow through a chalcogenide glass to change from a crystalline phase to an amorphous phase. Moreover, since it has the "bistability characteristic" that it can be returned to the crystalline phase by keeping the crystallization temperature for a certain time, the switch can store information and it can be used as a nonvolatile memory There is a feature.

Compared with silicon flash memory which is mainstream at the time of article creation, phase change memory can read and write data about 100 times faster, still consumes less power, and has a longer lifetime as a product It is thought. Also, it is certain that the memory capacity of the silicon flash memory will eventually reach its peak as the size gets smaller, but there is no such restriction on the chalcogenide glass, because it is low power consumption, the smaller the size, the more efficiently It is thought to become functional.

Phase change memory discovered more than 50 years ago by Stanford is indispensable for allowing today's computers to run smoothly and to create a more sophisticated computer architecture in the future, It is thought that it will contribute to further development of the technology. John Ross, a pioneering chemist at Stanford University, said, "Stanford is a genius but not a scientist." For this reason, Mr. Peter gives two clauses to think about.

The first reason seems to be "because he was too genius", he quotes what Mr. Stanford said, "If you look at atoms and molecules, you know what they want to do," a genius that can not be measured by ordinary people He said he had sex. Even though Stanford seems to be pursuing a summary while turning pages of the book, it seems that after many years it was able to find the exact page where the information he wanted to know was written , He seems to have had an amazing memory ability to support genius.

The other point is that Mr. Stanford did not receive formal education that physicists would receive. Normally, physicists try to solve things mathematically by using mathematical expressions, but Mr. Stanford relies on visualization to solve things, it seems that they are solving the problem sensibly from the surroundings He seemed to have seen it only. Mr. Stanford certainly used to judge things using intelligence, but since he was inventing from a combination, changing various elements into a visual image, as it is intuitively inventing He said he saw it. Stanford, who got a lot of patents as an inventor but was unmarried from some scientists from its unconventional method. On the other hand, among the winners of the Nobel Prize there were a lot of people who wanted to talk to Mr. Stanford and talk to him like Ijidor Isaac Rabbi, and he calls him genius. Stanford, sometimes referred to as "Edison of this generation," Stanford's career covers the transition period from the industrial era to the information age, "Peter said in the future If someone like Mr. Stanford appears, it is expected that it will be a transition period of a similar era.