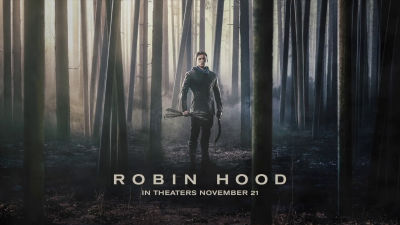 The final trailer of the movie " Robin Hood " played by Talon Egerton who showed the action of chelele in the movie " Kingsman " and " Kingsman: Golden Circle " was released on that Leonardo DiCaprio. .

This man who wears a green coat is Robin Hood who plays Tallon Egerton.

It is Jamie Fox which played the main character Ray Charles with " Ray / Ray " to play Little Jon who is a member of Robin.

Robin that holds several arrows at once and releases it at high speed.

And I steal money.

Steal money from aristocrats who do luxury ... ...

Robin Hood is drawn as a rigor who shares the poor.

Robin winks to his eyes.

A scene where Robin trains to be a master of bow and arrow as much as possible. The state of training is drawn in more detail in the trailer released in July .

Robin Hood is born as a right-hander, surviving hard training.

Defeat the soldiers wearing the armor with exact unequal archery one after another ......

It collects money and gives it to poor people.

Before such Robin stands out, a staggering group of people wearing black clothes.

It is the substitute of Nottingham that bundles this. It is Ben Mendelthorn who plays.

Robin Hood is a story to illustrate the thieves and the pillars who played a role in the medieval England, but the soldiers who defend Nottingham's substitute are strangely armed with mecha-sided crossbows.

Robin who jumps into the desperate situation that mutual misrepresents "No one in this is suicide" by his colleagues.

Speedy battle scenes will be unfolded.

It does not shoot arrows like a sniper from a long distance, but fascinates audiences with a faster action at a short distance.

Of course there is also romance. It is Yves Houston who is the daughter of Bono who acts as a vocal in the rock band ' U 2 ' that plays the heroine.

Robin's nephew, Will Scarlett's role is Jamie Dornan who played Christian Gray in the movie ' Fifty Shades of Gray '.

"You will inspire the people"

A large amount of money stolen

A scene of astonishment that a substitute officer in Nottingham appears from the gap.

An arrowhead of a spider gets aim at Robin.

In another scene jump from the carriage and show off bold rope action.

The last is chased by molten iron heated by the muddy, the trailer is over.

The movie "Robin Hood" is published on November 21, 2018 in the United States, but the schedule in Japan is undecided.