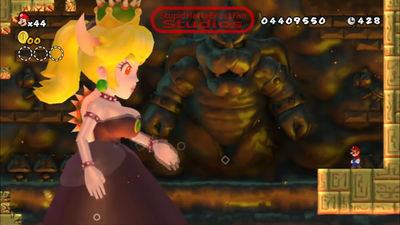 On September 14, 2018, " New Super Mario Bros. U was to add a" new element " New Super Mario Bros. U Deluxe " is Nintendo Switch has been announced that will be released to the market. As one of the new elements, the existence of a new item "Super Crown" that Kinopico can transform into Princess Peach was revealed, but a fan who knew about this is "to kick off peach and Mario to date" I drew fan art . Then, this fan art became a fire, and " Bowsette (Princess princess) " became a big fashion globally overnight. Mr. StupidMarioBros 1 Fan who uploads such a movie that makes Kita Princess appear in " New Super Mario Bros. Wii " indeed many of Mario's modified movies is on sale .

Actually the state that the Princess Kuppa is going to rage during the game can be seen in the following movie.


The thing that stood in front of Mario that reached the deepest part of Kupa Castle is not the usual Koppa ... ... but Princess Kuppa who made Princess Peach. This princess Koppa is based on the model of Peach Princess that appears in " Mario Party 9 ". The hairstyle of the ponytail was the one of " Mario Strikers Charged ", and the collar and arm accessories diverted the parts of the "New Super Mario Bros. Wii" koppa. It seems that the color of eyes and earrings are also changing to colors different from Peach Princess. When Mario stepped on the switch at the right end, the floor collapsed and Princess Kuppa fell to the bottom of the abyss. However, when Camok straddling the broom makes magic ...... Rushing fast without worrying about the waves of bright red lava ...... Princess Kupa who chases Mario in a head butting against Koopa castle. The place where Mario that escaped reached was the genuine peach princess trapped in the cage and the huge switch. Princess Kuppa was swallowed by lava with a crumbling castle. 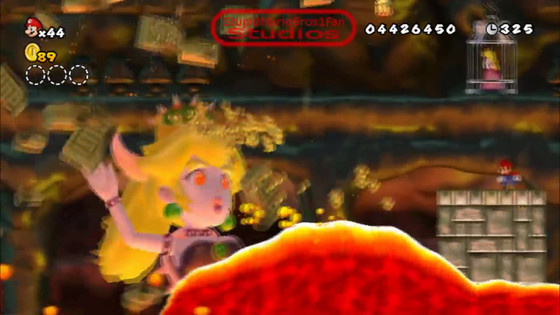 The Princess Kuppa who was thrown out was detached from the super crown which made Peach Princess, and returned to the form of Koppa. The movie is over at the scenes where the Kupa Castle collapses to the Rubboro's Kuppa Corps. The "New Super Mario Brothers U Deluxe" is scheduled to be released on January 11, 2019, Amazon.co.jp is available for Amazon limited edition at 6458 yen including tax. 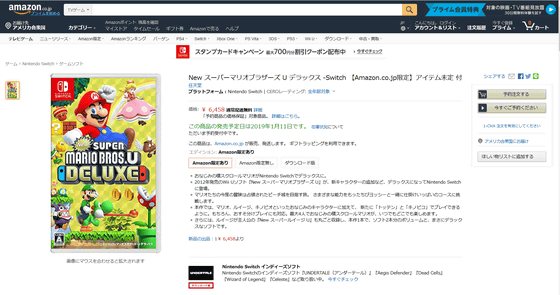