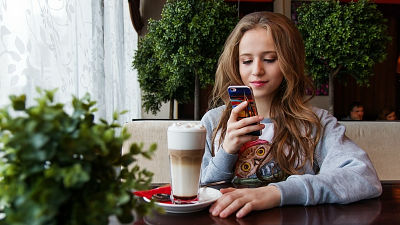 Speaking of "Instagram" for many people is a platform for showing pleasant photos with friends and acquaintances. However, in the United States, it seems that there are an increasing number of cases where teens Instagram users who have many followers receive money and introduce products such as apparel brands to advertisements.

In the summer vacation period when the school is closed for a long period of time, the number of teenagers who earn money by part-time job etc. will increase. In the case of the United States, many boys and girls get salary by doing supermarketing, babysitters to look after the babies such as acquaintances, etc. However, there are emerging income earnings unique to modern times of SNS.

That "job" is to receive money of dozens of dollars (thousands of yen) from brands handling products such as fashion and cosmetics for young people, especially to young people, to use instagram of the brand's products Things to post. In order to get to this job, it is necessary to satisfy the condition "I have many followers", but if you have an account with thousands of followers you can be eligible.


They are all super cute and high quality especially the jeans! # american apparel ✨ # ad


A 13 - year - old girl who lives in Pennsylvania said, "When I work, I need to train a lot and I have to work for hours a day after going to work, but if I do this (Instagram 's job) I can get 50 dollars (about 6000 yen) just by submitting it. " This girl who responded to The Atlantic 's interview subject to the unnamed publication has 8000 followers and seems to have income of several hundred dollars (tens of thousands of yen) in about one month after starting "work".

It is not easy for young people to get to work with good conditions. In recent years I have not graduated from college in the United States, because I can not find a job in Roc, it is not easy to find time to work by taking time to school while I am young. Also, it is difficult to hire a young girl who is about 12 years old because there are legal problems, so it is difficult for a generation called so-called "low teens" to find means to earn money by themselves. It is said that the one that appeared in such a way spreads around the girls of the cheapest, in the way "Instagram money earnings".

Helen Boogzel, CEO of girls' fashion brand Boogzel Apparel , says that he receives daily offers from girls. Mr. Boogzel says that marketing targeting teenagers is important, especially for brands that are short-lived since their establishment, "Mr. Boogzel said," Inside the brand, collecting "nice" with money and exposing to fashion magazines However, it is fake (fake), it makes it bad.It is better to connect directly with teenagers and listen to honest opinions about brands.Our products are youth culture and internet I am inspired by the young people who are making this culture, "he says about the effect of branding using SNS.


make sure you comment which is ur fave !! also, y'all can copy these cases from @ apopcapopca, the website is in their bio and the url is popca.ca !! it's all free shipping which is cool if u ask me! • • • # ad # niche # meme # memes # nichememe # nichememes # nichememeaccount # like4like # likeforlike


We say that there is another merit to incorporating teenagers into branding. That is "the cost can be reduced". Depending on the number of followers, the cost of paying per contribution is between $ 5 and $ 20 (about 600 yen to 2200 yen), paying hundreds of dollars (tens of thousands of yen) to people called celebrities and celebrities In addition to that it is much less costly, and it is also merit that being able to suppress 'advertisement's warmth'.


hi everyone! so @ coola generously sent me some things I wanted to try literally in 24 hours! once I got over the shock of how amazingly fast they arrived I tried them out and have been enjoying them! - tinted mineral liplux in shades " These are a sweet scent and come in gorgeous and sturdy candy colored metal tubes! -tropical coconut sunscreen spray coconut first off, this smells absolutely magical like vanilla coconut! it's non greasy, with no white cast and dries almost immediately! since this is so enjoyable and easy to apply I will definitely be applying SPF more often. It applies to aquatic face with serum this serum comes in packaging that serels this feels really nice and heavy in my hands. it applies like a very thin gel consistency but soaks into the skin after around 1 minute which is great! I spray so much on my face, it usually fades from my face while my body is still dark so it's great to have this serum to be able to match up evenly! develops in 2-4 hours so i would have applied after this your your skincare routine before you go to sleep! thank you so much to Ashley and @ coola for gifting me these again! # coolasuncare # coola

Some young people are increasingly showing the level of being able to call it "business" by just escaping from "making money". In a group formed of 14-year old girls, an attempt to bring out better conditions from the brand by launching their "agent" only in a form, preparing logos and "business e-mail address", etc. Is carried out.

By doing so acting as a "pro" like this, you will acquire skills that are equal to those of "adult business" such as photo editing, sales, marketing, budget reservation, workflow management etc. among young people People seem to be appearing as well. At that moment, it seems like I will be out of the purpose of Instagram advertising which makes the goodness of "amateurs" anymore, but there seems to be young people trying to take advantage of the opportunities with such professional consciousness.


However, as this approach is a strategy to establish the gray zone of law, it is also true that we have various problems. In the summer of 2018, the case that the fashion brand " so aesthetic " refuses payment to young people has occurred, and there is a situation that actual payment has not been done even at the time of article creation.

But that is a rare case, and in many cases transactions are done without problems. Some children develop "business" under the official recognition of parents, and it seems that money earnings unique to SNS generation are born again.