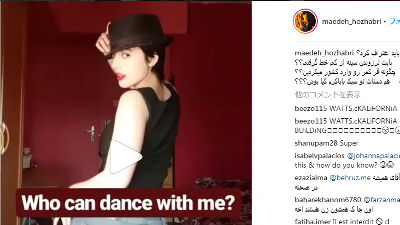 In Iran, it is controversial that an 18-year-old girl who published on SNS the appearance of dancing in her bedroom without wearing a headgear was arrested and detained. While some people criticize the behavior of girls, many dance videos are posted on SNS saying 'dancing is not a sin'. 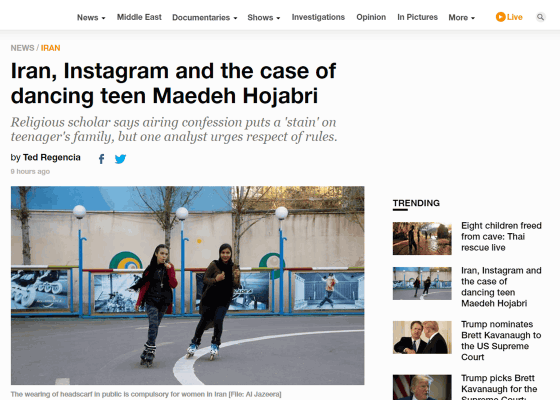 18-year-old Maedeh Hojabri is a woman who posts a movie of dancing to her Instagram account. Dancing to the music of a well-known artist in your room is common on American teenage accounts. However, Hojabri has been arrested for posting a dance movie on SNS.

Teenage dancer, Maedeh Hojabri, was arrested in Iran. She used to record dance videos in her bedroom and upload them to her instagram with 600K followers. # مائده _هژبرى pic.twitter.com/3EDVR9veV3

Under Islamic republic, women are required to wear headgear in public and women are not allowed to dance. On the other hand, there are women who oppose such rules, and there are also women who dare to take a headgear in a public place to protest and post a movie on SNS. In response to this trend, the government is blocking messaging apps such as Telegram.

Hojabri said when he appeared on a television show after he was released, 'I don't encourage others to do the same.' There was no purpose to call attention, and I simply explained the intention of 'I wanted to share it with my followers.'

However, after the television show aired, reformist priest Mohamad Taghi Fazel Maybodi said that Hojabri's opinion was aired: 'I made a woman confess and airing it smeared the face of a woman's family. That's it. ' 'Islam emphasizes the privacy of women and families, but the executives on this television show ignored these religious practices and touted people's reputation,' Maybodi said. Maybodi did not directly comment on the adequacy of the movie Hojabri released, but said, 'It is a big crime to confess that an embezzlement came to state television and stole public property or that it was corrupt. It's whether it's stealing public property or dancing. '

Meanwhile, arrested fashion photographer Reihane Taravati, who danced to Pharrell Williams ' 'Happy' in 2014, said, 'The authorities arrested me at the age of 23 for being'Happy'in 2014. Maedeh Hojabri, who was arrested this time, is 18 years old. What are you going to do for the next generation? '

You arrested me for being #Happy when I was 23. Now you arrest #MaedehHojabri and she is only 18! What will you do to the next generation?

Elham Kadkhodaee, a professor of philosophy and commentator at the University of Tehran, Iran, emphasized that the material posted on social media is 'clearly public and within the scope of law enforcement,' and the movie is from Iran. He pointed out that there are some factors to consider about the use of SNS in such countries. 'It is very important to point out that Iran has its own culture, customs, standards, etc. that are different from other countries.' 'Different countries are different for social and cultural issues. We should understand the reality of having an approach. '

Journalist Negar Mortazavi also commented on Hojabri's arrest and detention, along with coercion of headgear, 'a very political issue' and 'a visualization of the power of the Islamic Republic.' One of Mortazavi's friends was arrested for being 'not enough' and 'too colorful' despite wearing a headgear. Many people are angry at such government regulations, and some Iranian women in recent years have taken 'creative ways' to show their opposition to regulations. However, regarding Hojabri, Mortazavi says, 'Innocent teenage girls danced in the bedroom for someone who enjoys dancing, not for expressing political slogans.' ..

In addition, Iranian media reports that 'authorities are considering banning Instagram accounts and banning access to the site.' On the other hand, following Hojabri's arrest, many videos with the tag '#dancing_isnt_a_crime (dance is not a crime)' have been uploaded on SNS such as Instagram.

Iranians post home videos of their dancing to show solidarity with famous instagram celebrities who were arrested for posting their videos online. # مائدة _هژبرى pic.twitter.com/vJBudlIzSK