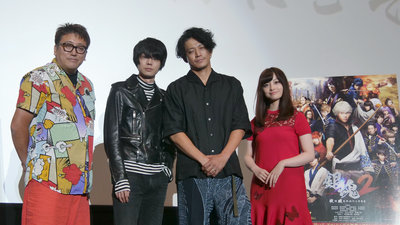 The stage greetings of the movie " Gintama 2 Command is to Break " will be held at Osaka Station City Cinema on August 17, 2018 (Fri), Director Yuichi Fukuda , Gin Sakata role, Oguri Shun , Shimura Shinpachi role, Masaki Sugana, Mr. Kagura and Ms. Hanamoto Kanna attended. Oguri says that beer has entered lightly and is in a mood state, as it is said that two days of the stage greetings have been finished in Kyoto this morning. At the question corner, there was also a scene where Mr. Hashimoto's "Kagura" plenty was revealed to surprising questions from general fans.

The movie 'Gintama 2 Command is There to Defeat' Official Site
http://wwws.warnerbros.co.jp/gintama-film/ 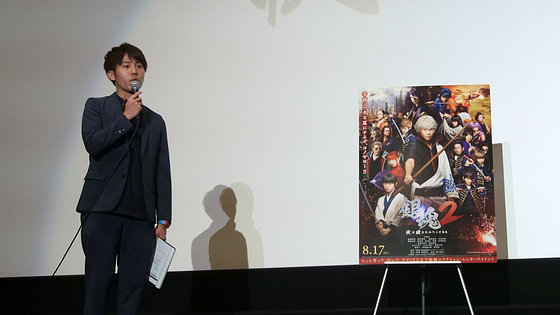 The Osaka station city cinema where this stage greeting was held is actually a theater where most entertainment income was the most at the time of the previous work release, and this time the guests packed the stage greetings closely. A big cheer celebrated at the time of the entrance, especially for Ms. Hashimoto, female fans also had the voice of "cute" flying. 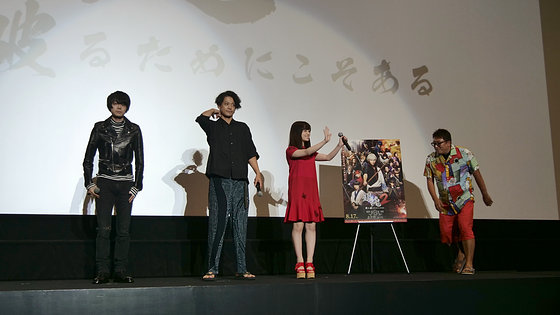 For Mr. Sugata who came from Minoh City, he is a local winner. In the area other than the work such as the topic of " Takino no yuzuru " that gets to the top with the local character loose character Grand Prix and the topic of the father who is often messed with megane neta, it is exciting, "What am I talking about? There was also a scene to return to me.

The work has become a hybrid composition of the feature episode "Shin Selection Tribe Hen" and "Shogun's entertainment story" popular in the original. According to Fukuda, originally it was thought to do with only the episode which goes to the general, the pool, the ski, the cabaret club, and the barber's shop, but "I thought that this is useless, let's do it properly", and this around November 2017 It seems that it was decided to become a composition.

Mr. Oguri first entered from the shooting of the action scenes with Mr. Kousaku Kawakami and Masataka Kubota, and later shot a comedy part. Because I finished my arm muscles for the cabaret scenes, Mr. Sugata says "I am not the body of the actor". Incidentally, Oguri says that it may be said that "gorilla", may not fat if the shooting period is over? It was somewhat brilliant.

In addition to Taikin movie village, this work also filmed in Osaka, such as using the Miyukoen universe with cabaret scenes, and on the shooting end day, an episode was also shown that everyone went to eat Kushikatsu . Because it was a shop where there was only a counter seat, Mr. Fukuda, headed by Mr. Sato, Mr. Oguri, Mr. Hashimoto, Mr. Sugata, Mr. Okada, Mr. Masami Nagasawa, producers are eating in a row . Mr. Hashimoto liked kushikatsu too much, revealed that I had made a reservation and went to eat when I came to Osaka by another job.

The second half of the stage greetings accepted questions from fans. A man who is adored to Mr. Sugata receives advice from Oguri-san, "Do not listen to Sugata what you want to hear", asked "What's your favorite hairstyle?" Mr. Sugita who made various hairstyle is worrying, when making her hair pink, she responded that she became "spiritually or myself" by spiritual margin because she was obviously not being herself. There was a pleasant answer to the question "Do you have plans to do 3?" From the director, "There is a possibility if this hits again".

For Mr. Hashimoto, Mr. Hashimoto who said "We ate breakfast, what did I have?", Said "Hurray says a little" is a "steak" and surprising answer. As I stayed at the hotel, there was "Morning Steak" so I ordered it and showed me realistic Kagura's likeness. According to Fukuda, "Kankan (Mr. Hashimoto) is going to be a heavy thing in the morning," according to Mr. Hashimoto that the American dog and two rice balls were contained in the bag of the convenience store Also revealed. Mr. Hashimoto said that it seems to be "to eat deliciously when going out to eat rice together", Mr. Oguri and Mr. Sugata also commented that it would be fun to eat together.

At the end, it was time for the message from Oguri-san to the visitors, but with the proposal "Do you want the shooting time?", Apart from the photo session for the mass media, ordinary visitors shot for only 20 seconds and OK Time was set. Four people with big service waving their hands from end to end. 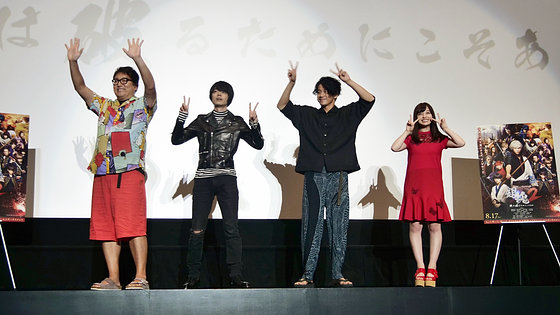 The movie 'Gintama 2 Command is there to be broken' is being released at theaters across the country . Try making the most of the original taste, it is funny to laugh, and it has become a cool work, so please enjoy it at the movie theater. Starting September 2, 2018 (Sunday), screening with a voice guide for the visually impaired will also begin. Also, dTV is exclusively distributing the drama " Gintama 2 - The Strange Gintama Chan ", which is a popular episode in the original and animated films. According to the movie release, the distribution of 'Sleepless Al Hen' has begun, 'Hijikata smoking book' will be delivered from August 25th, 'Dentist is irrelevant at any number' from September 1st.


Drama Gintama 2 Episode 1 Sleepless Al Hells Delivery began today!
It was a very favorite story in the original, so I was really happy and that I can appear in that Mr. Kugimiya ,,
Where can I hear that voice!
Everyone, please take a look. https://t.co/jvOMTEz7n3
# Drama Gintama 2 # Sleepless Al pic.twitter.com/9uwgFvCgpI