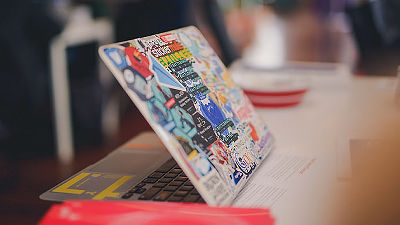 When you are spending time at a cafe, you may see someone working with a laptop with a sticker printed with your favorite brand or media logo printed on it. Dressing up as your own customization is not a bad thing, but security experts are alarming that you should consider that it is an act that involves security risks.

Putting Stickers On Your Laptop Is Probably a Bad Security Idea - Motherboard
https://motherboard.vice.com/en_us/article/pawvnk/stickers-on-laptop-operational-security-bad-idea

As an example Mr. Mitchell points out the act of sticking a sticker containing a political message. To stick a sticker that expresses a specific principle assertion striking it so that it is visible to people makes it doubtful from outside and causes risk to be marked. In fact, Mr. Mitchell 's friend hacker said that he was unable to get on an airplane because of such a sticker.

Also, even if it is not political content, there is also a risk that the sticker will be "indicating who the person is". Mr. Mitchell attended the security conference "DEF CON" held in August 2018, but many of the attendees who gathered at the venue brought in a terminal like Google's Chrome Book That was. Although it is an act that can be evaluated as a security measure to avoid data leakage at the time of theft by using a device that stores data in the cloud, pasting a sticker stating a specific media name, etc., It is said that there is a possibility of becoming a kind of "signature" for a person with " Some of the participants said that there were some people sticking the logo stickers of the media they belonged to in a big way. For general participants, it is not unusual for a device of a person who normally acts as a member of the media to contain much information that was obtained from the coverage etc. but is not available outside. Even if it was protected by a password etc., it seems that the act of walking while informing others that "I am writing writers with ○ ○" is not preferable from the viewpoint of security It is pointed out by Mr. Mitchell.

On the other hand, it is interesting that there is the fact that "the device on which the sticker is affixed is hard to be stolen". Mr. Mr. Bartle, who is involved in the Tor network, has ever been stolen with money due to vandalism on the car, but the only thing left at that time was that the sticker was pasted He said it was a notebook PC. According to the police, a thief who saw a notebook PC full of stickers judged it to have left it on the scene after judging that "such a PC will not be gold" and that a large amount of stickers will also have a drag as a certain crime deterrent It may be said that to demonstrate is a remarkable point.

Nonetheless, Mitchell is alarming that it is an "unusual example", and comprehensively it should be understood that dressing up with a sticker involves certain risks.