What is the honey drink recipe that appears in the first beekeeping manual written in English? 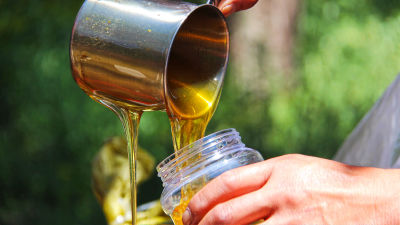 Honey is also known to have a bactericidal effect, and it remains in the record that in ancient Rome it was used as a wound treatment and as a raw material for pharmaceuticals. Also, since there is not only a bactericidal action but also an anti-inflammatory action, many people drink drinks mixed with honey when the throat inflamed by a cold etc. even in modern times. According to Matthew Philpott, a British studying beekeeping, "Beekeeping recipe written in English" describes "recipe of honey drink", and its recipe lives long in ancient Rome as recipe It is said that some were mentioned as drinks for.

It is said that the first Emperor Augustus of the Roman Empire asked "No way to live longer" by Nobility Prubus · Bedius · Poglio. In response to the question, Ms. Beidius Porio replied to Augustus, "If you drink Musa 's water, you will be released from illness." After that, there was no mention as to whether Augustus was drinking water from Musa and its recipe was not disclosed, but in 1568 a book that referred to the water of Musa appeared.

It is written by Mr. Thomas Hill "A Pleasant Instruction of the Perfect ordering of Bees" (a fun textbook with complete control of bees). This book mainly describes the content of beekeeping, but in this Musa 's water appeared as "to prepare breath and improve appetite", and the recipe was described. In the recipe, "Mix honey and water with 1: 8, then when you boil over a fire, take scoops of foam cleanly, complete when all the bubbles are gone, save the fire and save it" Was written, and "It says that" saved "Musa's water" is drunk when needed "was also described. Mr. Hill says, "By drinking water of Musa you can cure the symptoms of poisoning of Hyos ". However, I did not mention anything else specifically, and I was never touched about "Is it the same as Moses' water mentioned by Mr. Bedius Porio during Roman times?"

Also, this book contains not only "water of Musa" but also recipes of "Oino Mell", which is said to be drinking by ancient Greeks. Mr. Hill says about Oinomel "It not only keeps you healthy, it is also released from suffering of the disease". In the recipe, "It is written that 1.25 gallons (about 4.7 liters) well-aged wine is prepared and only 0.5 gallon (about 1.9 liters) of good quality honey is mixed", and a recipe for making a very sweet wine is written It was.