Besides iPhone, Apple has a big 'earnings head' growing every year 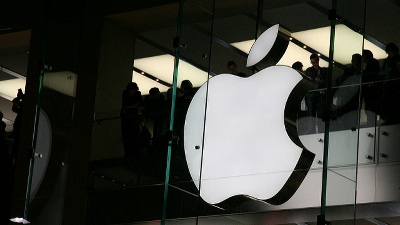 For Apple, there is no doubt that iPhone is now the company's largest source of income and it is the driving force that pushed the company's market capitalization to the level of $ 1 trillion to the world's most valuable enterprise . Although it is hidden behind such iPhone's shadow, it is not so conspicuous, but in fact the company's service department, in particular " App Store " is growing as a major pillar of profitability.

• Chart: Apple's Services Segment Is a Beast of Its Own | Statista
https://www.statista.com/chart/14629/apple-services-revenue/

Apple's sales are steadily increasing every year. With quarterly sales figures as a graph, the vertical axis shows "billion dollars". Sales have been rising as a whole as a result of rising and falling every quarter as a whole, and in the first quarter of 2018 right after the iPhone X was announced, the company's sales reached 90 billion dollars (about 10 trillion yen) I know what I was doing. 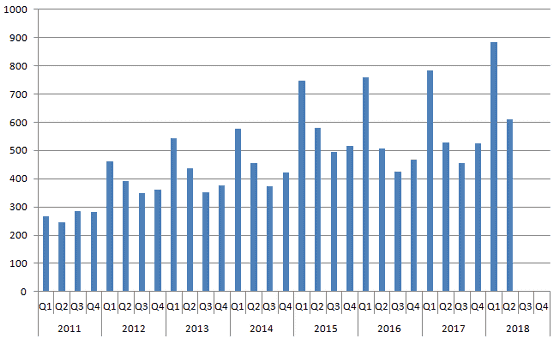 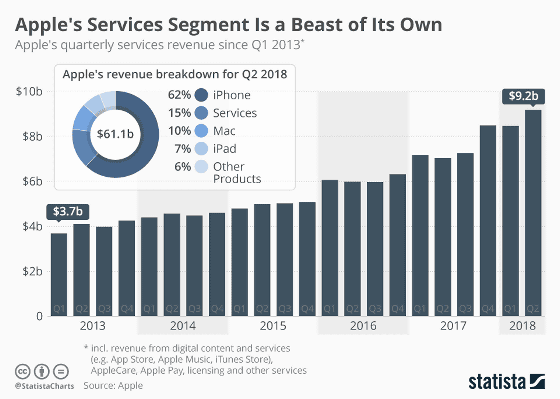 Companies' overall sales for the same period were $ 61.1 billion (about 680 billion yen), and the service sector accounted for approximately 15% of the total . 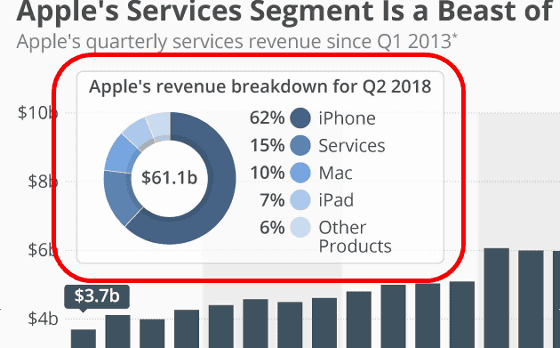 This "service division's sales" is a summary of sales of "digital contents", "service", "AppleCare", "Apple Pay", etc. Details can be checked in Apple's performance announcement material . 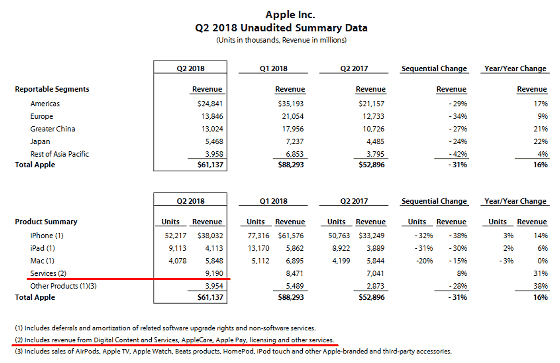 Statista analyzes that the driving force that the "service department" has grown greatly is in the development of the App Store. In the year of 2017, Apple paid 26.5 billion dollars (about 3 trillion yen) to the application developer, but Apple released application sales at the ratio of "70:30" in the application development It is said that 70% is paid to the person, and it is thought that Apple's marketing margin for application sales at the same time has roughly calculated 10 billion dollars (about 1.1 trillion yen) Thing.