Why did Scotch · Whiskey begin to mature with sake barrels? 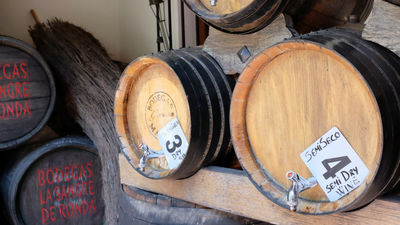 Scotch whiskey produced in Scotland, England, will aged by putting the distilled liquor in a barrel and laying it down. Some Scotch whiskeys use barrels used to store Sherry during aging, but Sherry , a kind of wine, is a brewed wine made from grapes and made from cereals It is completely different kind of liquor from whiskey which is distilled liquor. Nevertheless, Sherry Barrel is still indispensable for whiskey.

The origin of whiskey is not clear. However, the oldest record about whiskey remains in the Scottish royal account book in 1494, and we know that it was already established at that time. It is said that whiskey was made as a medicine by the monastery, and there were many patterns farmers had built to sell surplus barley, but it seems that there was no idea of ​​aging in barrels until the Middle Ages.

Sherry, on the other hand, is a liquor of origin, originating from wine growing originating from Jerez de la Frontera in southern Spain around the 12th century BC. Sherry, widely drunk in Europe mainly in Spain, gained popularity in England in 1587 when the England- West War fought between Spain and Hapsburg in the morning. Francis Drake, then Admiral Admiralty of the time, attacked the city of Cadiz in the southern part of Spain, brought back some 2,900 Sherry Barrels. Booty Sherry was a boom among the upper classes, and a sherry boom spreading to Scotland as well as England. In the early 1700s Scotland was annexed to England and the Great Britain Kingdom was established. At this time, the Kingdom of Great Britain imposed a high tax on merchants who were building whiskey in Scotland. The monasteries and farmers hid the whiskey in an empty barrel of Sherry liquor which was surplus at that time in order to escape severe tax collection. Whiskey was aged in barrels while escaping from tax collectors with the excuse of "This is Sherry liquor", not only did it take on a beautiful amber (amber) color, but the taste and smell were also wonderful It was. From here we establish a technique to mature whiskey in Sherry Barrel.

However, whiskey and wine became mainstream, and the popularity of Sherry sake declined, production of Sherry sake dropped accordingly. It was extremely difficult to get high-quality Sherry Barrels, and Jerez de la Frontera companies also became less cooperative. The barrel gradually used for aging will shift from Shelley barrel to bourbon barrel, and at the same time the taste of scotch whiskey will change dramatically as the times go. Mr. Stuart McPherson , woodmaster of the stock " The McCarran, " sometimes referred to as "single malt Rolls-Royce" said, "Barrel timber is the most important factor in creating whiskey personality.The whiskey final 80% of the typical taste comes from a cask (barrel). " Also, according to Dave Bloom, a whiskey researcher, the American white oak material used in Bourbon barrels gives whiskey a scent like vanilla, coconut, sweet spice, caramel. On the other hand, European oak wood used in Sherry barrels seems to add scents like raisins, prunes, incense and cloves to whiskey.

Several manufacturers struggled to protect the taste of Sherry wine barrel aging. For example, from the 1960's to the 1980's, there was also a distillery that used the rough skill of seasoning old barrels for aging, using sherry wine with high alcohol and high quality, called " Paharete ". However, this method became illegal in 1989.

In addition, the distillery of The McCarran negotiated directly with Sodey's Bodega (brewery) in Jerez de la Frontera, in anticipation that Shelley Barrel will become unavailable, "We made it at the distillery You can lend a barrel to Bodega and get the barrel returned after using it for aging "to continue aging by Sherry barrel still. According to McPherson, the barrel that matured Sherry drink for one year is trading at a high price that is far above the bourbon barrel, about $ 1,300 (about 150,000 yen). At the new distillery " Isle of Raasay Distillery " just opened in September 2017, we are considering purchasing Sherry barrels to pursue the traditional Scotch whiskey that was once being made, the founding of the distillery It is said that Mr. Chris Hoban made a scouting tour to Jerez de la Frontera. Mr. Hoban said, "When I met with people in the distillery of Glen rivets , they had planned 100 years for the management of Sherry barrels, which is 100 years.The industries that have to think about the previous things so much There is no other one. " In order to maintain the relationship between Scotch whiskey and Sherry sake it is always necessary to forecast the past and the future in the long run.