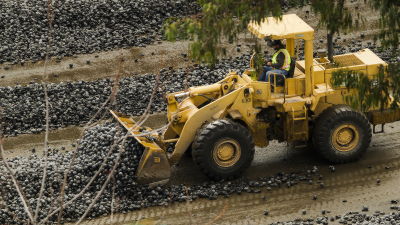 " Shade ball " is a small plastic sphere used to prevent reservoir water evaporation. It is a shade ball that is used for water saving, but in fact it is pointed out that it may consume more water than the amount of water that can prevent evaporation.

Using 'shade balls' in reservoirs may use up more water than they save | Imperial News | Imperial College London
https://www.imperial.ac.uk/news/187247/using-shade-balls-reservoirs-more-water/

Reservoirs made artificially can be very useful in some areas because it is possible to supply water stably even if droughts and the like occur. However, since a considerable amount of water evaporates from the water surface, "reservoirs" often have "shade balls" to prevent evaporation.

In preparation for the drought that occurred in California between 2011 and 2017, there were 96 million shade balls floating on the reservoir. The black plastic ball of the following photograph is a shade ball and it is used to cover the surface of the water to prevent water from evaporating from the water surface. In the drought that lasted five years in California, shade balls are deployed in reservoirs one and a half years before the end of the drought. However, according to the latest research published in Nature Sustainability, it is pointed out that the amount of water that can be saved by installing a shade ball is less than the amount of water required at the time of manufacturing.

Dr. Kaveh Madani, coauthor of research papers, is a person working at the Imperial College London Environment Policy Center. Dr. Madani says, "In the solution to some problem, it is common to overlook the long-term and side effects, somewhere to solve the problem and create a new problem somewhere else." , It is said that in engineering it often happens that shade balls used in reservoirs were not saving water if viewed in the global environment as a whole.

Shade ball is a plastic ball manufactured using oil, natural gas, electricity, and it requires a lot of water for manufacturing. In order to produce 96 million shade balls with a thickness of 5 mm, which is the standard size, an estimate of 2.9 billion liters of water is required, but in the calculation of the research team, it was possible to prevent evaporation from the reservoir by the arrangement of shade balls The amount of water is 1.7 billion liters, which clearly shows that the shade ball manufacturing cost more water. The research team calculated that it is necessary to keep the ball floating in the reservoir for more than two and a half years so that the amount of water that can be saved by shadeball deployment exceeds the amount of water used in manufacturing the shadeball It is. However, this is a figure when you can prevent evaporation of water in the reservoir at the same level except when the shade balls are in a drought. In fact it is expected that the efficiency of preventing shadow ball evaporation will be worse if there is no drought. Therefore, if you do not let the ball float for a long time than the spiked figures, it is considered that the water saving amount will not exceed the amount of water used at the time of manufacturing.

However, if the shade ball is floating, the growth of bacteria adversely affects the water quality. In addition, it is pointed out that the manufacture of shade balls may also affect water pollution and carbon emissions.

Because global climate change is expected to cause frequent hot weather and droughts in the future, water management is more important than ever. Dr. Madani says, "We are not saying that shade balls are bad, but we stress the fact that we must consider its environmental costs and benefits."