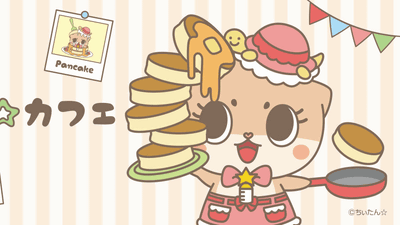 The cafe " Chitan ☆ Cafe " with plenty of fun collaborative musics that imagined Chiantan 's challenge movie titled "Runaway Yuru Character" will be available from July 20th (Friday) to July 31st (Tuesday) We will open in Yurakucho for a limited period of time. Business hours are Monday to Saturday from 11 o'clock to 21 o'clock, Sundays and public holidays from 10:30 to 20:30. There is no advance reservation, and when there is congestion entry regulation by distribution of a numbered ticket etc. may be done.

Scientific method for "making friends" at the fastest speed - GIGAZINE

What kind of melody is the world's oldest song 3400 years ago? - GIGAZINE


It is a dog whose identity has collapsed so much as to be a human being pic.twitter.com/kTBuD9RoHm


I want to wear this wearing pic.twitter.com/sZxGP9lh4u


Crisply I wanted to work but changed to iMac but work efficiency has dropped considerably more than at the time of the note ...? pic.twitter.com/ZTanXw4ziI


Ota station 2 electronic light bulletin board of the station roughly grass pic.twitter.com/U4Qtkxl1 It

"If you think that it is difficult to read an academic book, you can skip it and read it from where you know it." What is the reason why such a deep understanding is - Togetter


Five people, known as "voyeur black hunters", were arrested for finding a man who took the lady at the station and threatened 1 million yen in cash, and the Metropolitan Police Department is investigating it as repeating the extortion case. Three out of five people against the investigation are denying charges.

Major ministers resigned one after another ... What is happening to British political circles now (Kobayashi Kyoko) | Modern business | Kodansha (1/4)

The remains of Asahara former death row prison "To make it powder and to scatter to the Pacific Ocean" ... Four woman agent, request for support to the country side - Attorney Dot Com

Request for relief of flooded vehicles, too much to keep up with JAF: society: Yomiuri Shimbun (YOMIURI ONLINE)

Sightseeing information in the Kamogawa river in Kyoto ... sighting information ... illegal possibilities if you move it arbitrarily - lawyer dot com


I turned around and turned in cramp. pic.twitter.com/C2bpWomDiU


Recommended because we enjoyed it like 'Akijima Hotel Urashima' when I first went to Wakayama. Anyway it is wide. There are hot springs around the hotel, walking from end to end for over 20 minutes. It's almost a cave on the way or in the hotel, and the feeling that the scent of Showa remains is messed up. The limestone cave hot spring is the best. I want to stay again ... pic.twitter.com/0Vor9z3fxT


It is a thing from the Chinese follower. pic.twitter.com/5 ocCiyAgsv


The sky above London is amazing ...

Everyone stops the car and looks up at the sky .... After that, the Air Force's airplane and helicopter are flying in line as Raizoma company's drones ... .... ??????


It was really a flute .... Zuck 's breast belt buckle on North Face. I have used it for 10 years but I did not know. pic.twitter.com/ZN7kz6oXiG


It is the appearance of the signboard cat of our green tea house where my mother works. Pic.twitter.com/9 l8vciisBt


The gummy candy "taste sugar" cororo "has reached the area of ​​art. https://t.co/RKd9t6RTZQ


Evacuation living in Italy, the same natural disaster majority as in Japan / Italy "Only 20% of temporary housing will be made after one year" - Togetter

Do not you really eat "Weekly Shincho"'s "Do not eat" domestic food "? | Bunbun online

QP: The cap of mayonnaise to "three holes" - Mainichi Newspaper

Modern Food Culture Study Group, "Because the size of a bowl of a soba shop in the Edo period is about the size of a tea bowl, it is only recognized as" tea bowl "even though it is excavated - Togetter

"Japan version of GPS" Michibiki "It is possible to acquire position information of several centimeters accuracy with full-scale startup" is true (1/2): things to become things, things not to be done (78) - @ IT

A man who placed the power button here should have died. pic.twitter.com/ZqEGr6ujaB


The brewing map that the National Taxation Bureau is creating is detailed and amazing! "I will know if the visit is OK!" "I want to put it on the wall of the house" - Togetter


"I was dissatisfied with the account being frozen", "I had a grudge against multiple users who reported writing", and I also found memos marking multiple killing targets from my home It is said.

When I opened a second sheet of EXCEL with a new graduate, "A newcomer from that company has found hidden data" and "A wonderful guy seems to be in place" and a story that rumors spread to other companies in the same industry - Togetter

About a matter that is more intelligent than in a class Doing "Working Cells" in Class Let's Do (good idea) pic.twitter.com/hGjAdpI 54 k


Pick up the left hand pic.twitter.com/O5jUdL6FqI


T shirt wearing a wide denim wearing high waist I went to Urasui Yusuke I saw tweets but today, myself,
It was perfectly Uraki Yusuke ...

Well, is not it a complete copy? What? I am a woman but I am. # Yuuki Shiki pic.twitter.com/kghrgvGR 9 d


A professor got a comment if I was doing 80 x 45 Othello during the lesson of information. pic.twitter.com/EzSzpzvFDg


Currently Okayama's neighborhood has calmed down a lot, and aggie is flowing from upstream pic.twitter.com/5nRcKMMEAM


In the world, there are people who use their face photos on the cover of a doujinshi to be distributed at Comiket, and also hologram processing there.
It is me. pic.twitter.com/vd98Nb2dtV


This is a true battle royal wwwwwwwwwwwww # Fort Knight pic.twitter.com/8G8DZ5frdn


Memories when I was doing manuscripts in analog pic.twitter.com/ReE8uLD2WI


Notice of postponement of 'CODE VEIN' release As early as the original RPG we have been making extensive efforts towards the release date of September 2018, but in order to deliver to our customers as a better quality, high play response work, 2019 We have postponed the release date in the year. I'm sorry I have kept you waiting. https://t.co/DkgavcTmiR

To Mr. Masahiro Moriyoshi to the representative director of the Japanese national team, concurrently with the Olympics - Japan national team: Nikkan Sports