Microsoft secretly developed a CPU 'E 2' of its own instruction set, testing the operation of Windows 10 and Linux Register reported that Microsoft is developing a processor " E2 " that employs an instruction set designed entirely different from x86 . Semiconductor manufacturer Qualcomm is cooperating in the development of E2, and it is said that tests that already run Windows 10 and Linux are also being done.

In the E2 chip which Microsoft is developing independently, a unique instruction set called "Explicit Data Graph Execution (EDGE)" is adopted, and it is said that it clears the waiting problem in the lane which occurs in the existing instruction set about. EDGE divides the program into blocks of simple instructions and treats them as small transactions without data dependency to prevent processing interruption. Then, by letting many small instruction units process in the core processing block, many instructions can be processed at the same time. It seems that aimed at moving the software faster than the existing architecture with the structure that further advanced the " RISC " design.

According to Register, Microsoft Research has been working on developing processors that will adopt EDGE since 2010. After that, it is believed that R & D is proceeding as "E 2 project" adopting the instruction set to overtake Intel and ARM in a way that incorporates " TRIPS " know-how developed at University of Texas at Austin.

Qualcomm is participating in the development of E2, and it is expected to be developed as FPGA at the time of article creation. Register says that testing has already been carried out to port Windows 10 and its applications and that Linux was successfully launched as of October 2017.

At the time of writing the article "E2" has been deleted from the Microsoft Research site, but you can view the contents of the page with the following archives. 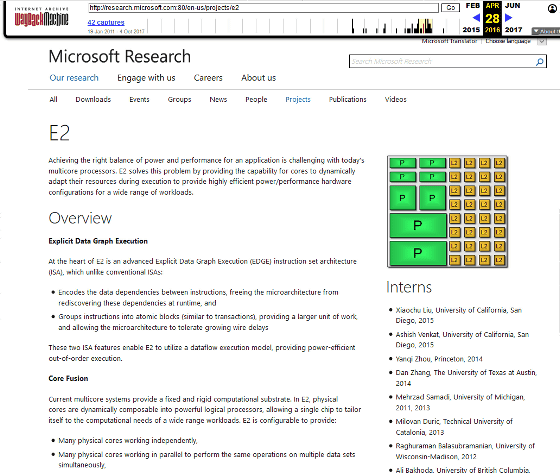 Unlike the existing fixed multi-core system, E2 adopts the structure "Core Fusion" which can utilize the physical core of the CPU as a powerful logical processor, so that even single chips can meet the needs of a wide range of workload processing I can explain it is explained. Core Fusion states that many physical cores operate in parallel for multiple data sets at the same time. And we can say that Core Fusion technology provides high power efficiency, covering embedded chip chips and high performance server class processors. 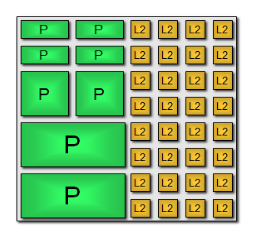 According to Register's report, Microsoft commented that "E 2 is" research project "at this time, there is no plan to commercialize it."