What is a painting "a dog that plays poker" that continues to be loved by Americans for more than a century? 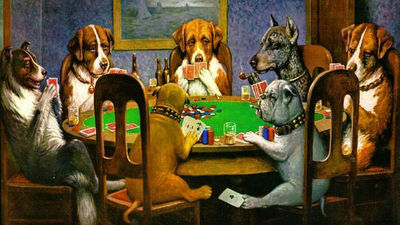 American artistsCathyce · Mercerous · CoolidgeDrawn by "Dog to play poker"A series of paintings known as the series is loved by many people for the first century since its publication in the early 20th century. In the auction of 2006, two sets of "A Bold Bluff" and "Waterloo" (meaning "losing defeat") in the series were sent as a set, and it was sold at 590,000 dollars (about 61 million yen) It was awarded and became a topic. About such "dog to play poker", a service that allows you to browse art works onlineArtsyIt is summarized.

Why This Painting of Dogs Playing Poker Has Endured for over 100 Years - Artsy
https://www.artsy.net/article/artsy-editorial-painting-dogs-playing-poker-endured-100-years

Mr. Coolidge who was born in 1844PhiladelphiaI grew up in a small town, working as a drugstore and painter from 1868 to 1872, while working very actively, such as trying to create banks and newspapers. Mr. Coolidge in 1873RochesterI will start acting as an advertisement painter who draws paintings to be used in advertisements etc. in earnest. From the latter half of the 19th century to the first half of the 20th century, advertising investment by American companies has grown quite large, and the timing when Mr. Coolidd wanted to be an advertisement painter was a perfect time for the wave of advertising investment expansion.

Although Mr. Coolidge did not receive special education as a painter, there was a talent to feel intuitively "What people see and smile," and the mosquito drew a painting or the like to perform the opera . In addition, a hole is rounded in the face part of a person, a passing person can put a face and take a pictureFace saddleboardIt is said that Mr. Coolidge's invention.

In 1894, Mr. Coolidge announced a painting in which the dog is playing poker in the title "Poker Game". Although it is not included in the "poker playing dog" series, Mr. Coolidge is loved as an early work depicting "a scene where a dog is playing poker." In the "poker game", the dogs are wearing glasses like a human being, and as if looking for the real intention of the other person, it is possible to look at the opponent from the top of the glasses or look like a smiley look I'm staring back at the other person. The concept of "drawing a dog like a human being" is not the idea of ​​Mr. Coolidge but it existed before that. In 1840Edwin LandseerA British painter named "Establish law"I drew a person an anthropomorphic dog named dog.

This painting is often talked about as having influenced the "poker playing dog" series, but compared to Mr. Coolidge's picture, the dog is solemn and there are parts that are less familiar. Artsy explained that Mr. Coolidge had "anthropomorphizing animals into humans" if LandSearer had "human beings animated to animals". Mr. Coolidge's painting, which became seen in homes throughout the United States, is characterized by expressions and gestures of very lovely dogs. In a painting named "Friend Necessary", a scene is drawn by a white bulldog sandwiching the club's ace between the legs and trying to hand over to the next friend. Also, in painting entitled "Crystal Bluff" drawn in 1903, St. Bernard strikes a big bet with only "2 pairs", trying to bring down the front partner from the game with a Bluff. In 1906, "Waterloo" which is the continuation of "Rough Bluff" was drawn. In "Waterloo", St. Bernard who succeeded bluff successfully was delighted, and scenes are drawn watching with a face that surprised two pairs where other dogs were held. There were 3 pairs in the hand of a dog who was unloaded by the Bluff and it won if it had not come down. Mr. Coolidge's paintings tend to be evaluated as "cheesy, vulgar", but a series of paintings depicting scenes full of humor still remain in the minds of many Americans.