How do pets see the sight that we are seeing? 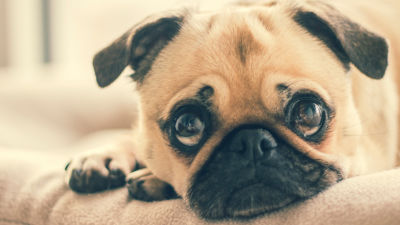 It is said that humans are more disadvantaged in identifying colors than other animals or seeing things in dark places, but researchers at Duke University have about 600 species of mammals, insects, fish, etc. We investigated the visual acuity of living creatures and showed that human eyesight is excellent in terms of "sharpness". Researchers at Duke University are developing software that shows in the image what kind of vision the various animals can take.

Visual Acuity and the Evolution of Signals: Trends in Ecology & Evolution
https://www.cell.com/trends/ecology-evolution/fulltext/S0169-5347(18)30052-1

Details That Look Sharp to People May be Blurry to Their Pets | Duke Today
https://today.duke.edu/2018/05/details-look-sharp-people-may-be-blurry-their-pets In this research, the visual acuity of animals is defined as c / d (cycle per degree of viewing angle)Spatial frequencyIt measured with. c / d is a range of 1 degree of vision that shows how creatures can identify how black and white parallel line pairs are not recognized as "gray". Of course, we can not ask the camel "How much can you recognize?", So researchers estimated their eyesight from the structures and behaviors of the eyes of living things.

The visual acuity of humans and chimpanzees is about 60 c / d,Onaga eagleSome birds have a sight of 140 c / d which is more than human. For this reason, eelgrass eagles can recognize the presence of small rabbits on the ground even from the sky. However, except for some eagles and vultures, it is said that the eyesight of many birds is less than 30 c / d, that is, less than half of the human eyesight. Similarly to fish, even fish with the most visible vision seems to be about half the capacity of human beings. Besides this, it is said that human eyesight in units of c / d is four to seven times larger than that of dogs and cats, hundreds of rats and flies. Eleanor Caves, a doctoral researcher at Duke University says that this difference is because many living things "because we do not need more detail than we need."

Based on the research, Mr. Caves developed software called "AcuityView" that visualizes the difference in the sight of living things. AcuityView can reproduce the visual information of various living things using one digital image. 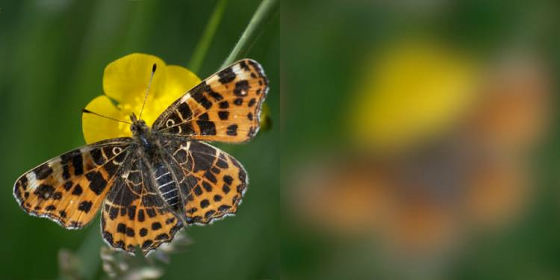 Image conversion of AcuityView reveals which living thing can identify the pattern of a specific living thing and can not distinguish which living thing. Researchers have discussed the role of patterns such as streaks and spots on butterfly's feathers. In the general hypothesis, it is said that the butterfly pattern has the role of giving a warning "Do not approach" to predators such as birds, but it is not intended to confirm each other's existence or tempt the pair Is it? It is also considered. In this regard, researchers at Duke UniversityRed cloverAlthough the pattern of the bird is identified from many birds, other butterfly patterns appear to be blurred to birds even from a distance of several inches (several centimeters). " In other words, the possibility of functioning as a warning against birds is small.

In addition to the theory that spiders of Scutellumaceae spawn zig-zag patterns, spiral patterns, etc., the reason is that "big creatures make them noticeable so as not to hit their nests" and "The temple is seducing prey There is the theory that. In this respect, using AcuityView, it is clear that "a bird can find a spider's nest from a place 6 feet (about 1.8 m) apart, but a spider's web can not be seen in a small creature such as a fly". 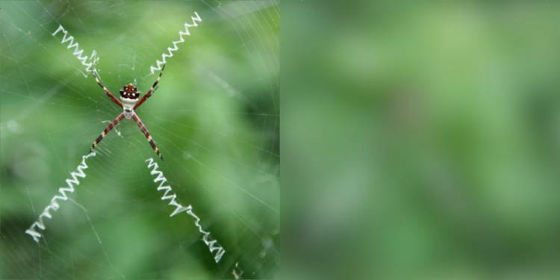