It is a Norwegian energy company in October 2017StatoilIs the world's largest floating offshore wind farm constructed offshore of Scotland "Hywind Scotland"is. Hywind Scotland is huge, 154 meters in diameter, capable of supplying power to approximately 20,000 households in Scotland. Staitoil has announced that it showed performance exceeding expectations in about three months since this Hywind Scotland began operation.

StatoilMasdarHywind Scotland is a floating offshore wind farm located 25 kilometers off the coast of Scotland and can generate up to 30 MW of power with five turbines.

Hywind Scotland has been posted in GIGAZINE in the past as well. 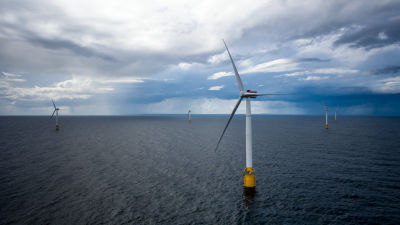 According to Statoil, during the winter when the strong wind blows, it is said that the utilization of offshore wind power of the type fixed to the ocean floor is generally 40% to 60%, but from November 2017 until January 2018 Hybrid Scotland's utilization rate of Hybrid Scotland in three months was about 65%, which is a result that was higher than the general number. When calculating 3 months as 90 days, it means 30 (MW) × 24 (hours) × 90 × 0.65 = 42,220 MWh, which means that we generated about 42 GWh of electricity in 3 months. Hywind Scotland stops the operation of the turbine due to safety issues when the weather is extremely tough, but it is designed to automatically start re-operation when the weather gets set to a certain extent. Furthermore, it adjusts the angle of the wing of the turbine according to the wind, and it operates so that the influence received as much as possible on large winds and waves is as small as possible. As a result, HyWind Scotland got over the two storms and was able to generate electricity so as not to waste the offshore winds as much as possible.

Irene Rummelhoff, executive vice president of Stoitile said: "More than 80% of offshore wind resources around the world are on a deep ocean where we can not build fixed seabed wind farms, We are sleeping great potential on the ocean and we are seeking opportunities for Hywind to be active newly. " Staitoil and Masdar said that they plan to reduce the cost of a Hywind type floating offshore wind farm to 40 to 60 euros per megawatt hour (about 5200 to 7800 yen) by 2030, Of wind power resources can fully meet with other renewable energy such as solar power, geothermal power, tidal power and so on.