On October 18, 2017, the wind power generation facility floating in the world's largest sea built in the offshore of Scotland "Hywind ScotlandPower supply began to be supplied. The windmill used here is a huge thing with 154 meters in diameter which is a combination of 3 blades with a wing length of 75 meters. By installing five windmills with 6 MW output per unit, electricity is supplied to about 20 thousand households It has the ability to supply.

The windmill was set up by the Norwegian oil company "Statoil" and five windmills were installed offshore 25 km off the town "Peterhead" located in the northeastern part of Aberdeenshire, Scotland. . I think that the electricity produced here is sent to Norway and is actually sent to the town of Peterhead via the submarine cable and is to be transmitted to the power grid in Scotland . Five wind turbines adopt a floating method that does not fix the foundation to the seabed. Considering the difficulty of construction and the influence of ocean current when constructing a windmill on the ocean, it is said that the water depth is around 50 meters is the limit of construction. However, the windmill developed by Staitile has a structure like "float" used for fishing, and it is designed to be able to generate electricity at sea at the balance while balancing with the weight attached to it. At this installation site the water depth is around 120 meters, and by connecting an ocean floor and windmill with an anchor cable, it is designed to stay at a certain position. The height of the windmill is 175 meters at maximum from the sea surface to the tip of the wing. The main tower extensions as low as 78 meters are sinking below the sea level, total length is 253 meters. Statoil is the comparison that shows have become a thing of difficult to understand a little Japanese, but it has become a larger than the Statue of Liberty and Big Ben, even only the main tower. In addition, the wings of the length of the per sheet of 75 meters, has become comparable to that of about 79 meters the world's largest passenger aircraft, "Airbus A380 aircraft". Looking side by side with Big Ben, it is like this. This enormous wing rotates so enormously that it produces 6 megawatts of electricity per unit. The construction of the windmill was done in Norway. The windmill is made up of a part floating on the sea and a part sinking in the sea and it is a process of completing it by combining the two on the ocean. Where a huge crane ship is used to lift the completed "upper body" and unite with the lower body. It weighs 670 tons for the main tower and 75 tons for the feathers, that is 225 tons for 3 pieces, the total weight of the upper body is 895 tons. The windmill, which was merged at sea, was driven by the ship, brought to the coast of Scotland, and moored to the prescribed position. This work was repeated five times to install, and power generation finally began. When it counts from the stage of the concept, it seems that it has become a project that has been working for 16 years. The question "Why the Norwegian Stoitile is a windmill in Scotland?" Is raised, but there is a law "The Climate Change (Scotland) Act 2009" established by the Scottish Autonomous Government. The Scottish Autonomous Government announced that renewable energy will be introduced to actively address climate change and will generate electricity with renewable energy equivalent to 100% of Scottish electricity demand by 2020. As a means for that, it seems that the autonomous government has decided to introduce the offshore windmill developed by Staitoil. Since Staito has an offshore oil field plant that pumps oil from the oil field at the bottom of the ocean, it seems to be behind the fact that he had the know-how necessary to make a floating offshore wind turbine like Hywind Scotland this time.


The background behind Scotland's construction of the world's largest wind facility is the law "The Climate Change (Scotland) Act 2009" established by the Scottish Autonomous Government. The autonomous government itself has decided to reduce carbon dioxide emissions by 42% compared to the 1990 level by 2020 and further by 8% by 2050 to actively address climate change themselves. In order to achieve this goal, the autonomous government has announced that it will generate electricity with renewable energy equivalent to 100% of Scottish electricity demand by 2020. As for the UK as a whole, we are committed to making 15% of total energy demand renewable energy by 2020, according to forecast, more than 30% of electric energy will be generated by renewable energy by 2020. At present, offshore wind power is only 3% of the capacity of all wind power generation facilities, and most wind power plants are installed on land, but in countries where it is difficult to obtain construction approval on land as in the UK, offshore wind power generation There is a high possibility of development.


In the world, planning for such a maritime power generation facility is progressing, research is proceeding in Fukushima offshore in Japan, and also in Germany, the United States, China and so on. Apart from this, we used the flow of the sea "tidal power""Tidal power plant" starts operation in ScotlandIn China, the construction of a large-scale power station that spreads solar panels using the vast space of the water is proceeding. 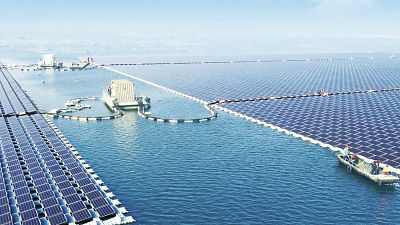 In this way, the development of renewable energy to replace conventional fossil fuel and nuclear power is being advanced all over the world, but on the other hand, too much dependence on offshore wind power will adversely affect the global climate The result of the investigation that it may give may also be clarified. It is necessary to convert something energy into electricity in order to produce electric energy, but it can be said that the balance collapses when borrowing so much energy is "natural". It is unlikely that it will be inevitable from the future how humans will continue to tackle big challenges in the future as to how to produce the energy required by the Earth, whose population continues to increase.

Offshore wind power generation can generate electricity on all the planets, but on the other hand it also adversely affects the climate of the earth - GIGAZINE 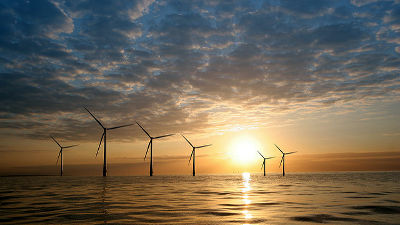 In the following movies, you can see the whole and part of Hywind Scotland construction.