In June 2017Acquisition by SoftBankWas announced Boston Dynamics published a new image for the first time in about two months on February 12, 2018. It is a picture of the company that shows a new surprise every time a new thing is made public, but the content of this time is that the quadruped walking robot opens the door and gives it through the companion.

Hey Buddy, Can You Give Me a Hand? - YouTube


The four-legged walking robot "SpotMini" with a yellow body appears at the beginning. However, this child is not a new robotIt was announced as of 2017Thing. I walked to the point of approach, but I faced being blocked by a blue door in front of my eyes. Suddenly, when I send a signal to the other side of the screen just as "Oooh, come here" .... Another SpotMini-kun appeared. On top of the body, something like a black arm is loaded. I opened my door carefully. A dog that gives you a passion by feeling like "Hey hello". Aside from "Before breakfast," I also got out of the door lightly. The appearance that the two "catch" the door while trying to comprehend the intention is as if two really dwelling live dogs seem to be there, I feel the height of the technique of Boston · dynamics again It is a content movie. At the company in 2017Robot "Atlas" with higher body capability than "Human back" capable of "back sun"Although it had announced it, it was released a year ago in it and already in the movieOpening the door and going outHad been stored. Next, I'm expecting to expect what kind of robot it will show me without thinking of the technology of Boston · dynamics under SoftBank. 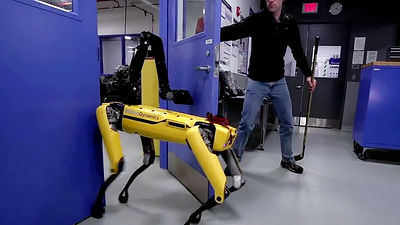