Koizumi producer answers "Mario's nipple problem" and "Kinoopio's alley is a head or a hat?" Before the launch "In this Mario there is a nipple!"I called a big topic."Nintendo Switch game for"Super Mario OdysseyHowever, producer Mr. Yukiaki Koizumi responds to questions asked by players in a movie released on the YouTube channel of Nintendo America, and it refers to the nipple problem, and so on.


Koizumi producer who dressed in a Mario-like bright red cost appeared. I will answer the question received from "Super Mario Odyssey" player at once. The first question is "Why does Mario have a nipple and no navel?" "This question from the beginning?" Koizumi producer seemed to have been thinking that he was not thinking that Mario's nipple had such a big reaction, while laughing, and he said he was very surprised. Also, at the same time Mario's "navel" was also talked about, so he says, "Then, it looks like the next time you write a work, I guess." You can tell how much the nipple of Mario was talked about by reading the following article. 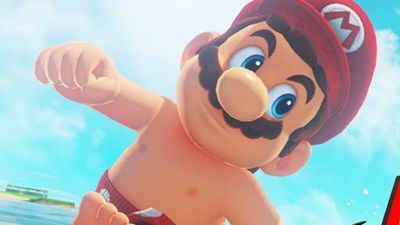 The next question is "Is the head of the kinopio is a hat or a head?" This seems to be a question for many people,overseasYaYahoo! ChiebukuroBut it may be taken up. According to Koizumi producer who has produced a number of Mario series, the head in the head of the kinopio is head. Also remarks meaningful, "Please imagine what is inside" ~. "Have you thought that fans would find it easily in the game but have not been found yet?" A comment that he wants the game to be played so that they can find such things, "I can not say it here". "Can you explain the relationship between Mario and Peach Princess and Mayor of Polyne?" For this, "Please leave it alone among three people", comments will respect the privacy of the three people pop out. "How did you decide to make elements of other games appear in Super Mario Odyssey?" In addition to Super Mario 64, this "Super Mario Odyssey" is adopting various elements from the past Mario series. Although he seems to decide what kind of element to adopt with the staff, Super Mario 64 is the origin of 3D Mario, so "I treated it quite carefully and decided to use it a lot this time" Thing. "How high is the score at the beach volleyball?" "Beach volleyball challenge" of a mini game that can be challenged at the beach of "Sea country Schwa Schwanna", but Koizumi producer said "I did it 100 times and I did it quite a while, it was pretty bad," and I fared quite a hard time You can see that. "Who in your team is fastest in Nokonoko race?" "Nokonoko race" of a mini game that can be challenged in various countries, but the development team's programmer was fast. However, since the game has been released, players all over the world are challenging the Nokonoko race and saying "People playing in the world are better at all". "Fans have encountered unknown hidden areas, etc. by finding coins, is it difficult for the development team to find all these areas or was it fun?" The development team seems to have received a lot of reports saying "I have gone to places I can not even go" when debugging the game, so put a coin in a more complicated place for a debugger who will adventure to such an unexpected place It is said that it became like. Koizumi producer "but I think it was quite very people who put (the coins), but" I think that was very good if there is a finding that the one "go to such a place," and, in the game by the development team and the debugger of cooperation I am clarifying that the depth has increased.