The secret of "Super Blackbird" revealing 99.95% of light and having wings featuring only black is revealed Papua New Guinea inhabits "Super Blackbird" that most of the body looks perfectly black from around by absorbing almost all of the light received by sunlight, etc. with feathers. It is too bad so it can hardly see patterns and irregularities on its surface, it is a bird that seems to be only visible as there is a dark black space, but what kind of mechanism absorbs the light, and Research has revealed what kind of "evolution" has been achieved for what purpose.

How Birds of Paradise Produce Super-Black Feathers - The Atlantic
https://www.theatlantic.com/science/archive/2018/01/super-black-is-the-new-black/549869/

This strange feature is that,FangaceaeIt is about 40 kinds of birds belonging to. Swallow, also known as "Gokuraku butterfly", is well known for male adults having very beautiful decorative feathers and doing courtship dancing with their feathers in breeding season.


Even the members of the Family family also have species that can be called "super blackbirds" and species not so. In the figure below, a and b are crows (a) and crochimedri (b) with "ordinary" black feathers, but the other white-tailed white-finned crows (c), white-tailed white-tailed swan (d), scaled swan (e ), Onaga Kanzaki Swan (f), Kata Kake Swan (g) have black feathers and beautiful color wings contrasting with it. According to Mr. Dakota McCoy, a graduate student at Harvard University who has been conducting research, it seems that the special structure of the ginkgo's wing feathers looks pure black. Crow Fang feathers (figure a in the figure below) has black feathers and beautiful decorative feathers, whereas twigs grow like tree branches around the axisOnaga kanzawa swanThe feathers are (b), you can see that the structure is very complicated, with the feather branching further finely. It is said that this structure changes the way of reflection of light and absorbs the light hitting the wing, creating a black looking appearance. Money with goldSputtering coating(C) and (d) observed with a scanning microscope (SEM), the feathers (c) of the crow's foliage reflect light, whereas the wing (d) I am left in black. The reason why the light is absorbed and becomes dark is absorbed while the light is repeatedly reflected in the gaps of complicated entangled feathers (a) and it can not jump out again to the outside. In the case of Onaga Kanzaki Swine, its absorption rate is99.95%, And the light is almost completely absorbed between the feathers. This means that the surface does not "shine", and people and cameras can not observe the surface condition. Therefore, the part is completely "darkness", it seems that the black part like the black hole seems to float in the space. It is the only one exceeding this absorption rate produced by Surrey Nanosystems in the UKBenta BlackIt can absorb 99.965% of incident light.

The "blackest substance in the world" transcending black color was born, and the unevenness of the coating was indistinguishable visually - GIGAZINE 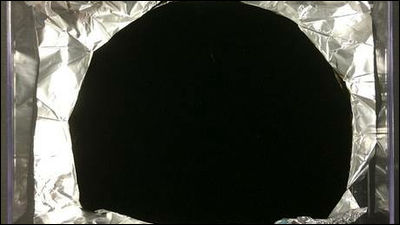 Since Venta Black absorbs all kinds of light, it is a mysterious situation that even if red laser light is irradiated as shown below, only the part of Venta black is not reflected at all.


Benta Black is an aggregate of small carbon nanotubes grown at a high temperature of about 400 degrees Celsius, and the mechanism of absorbing light is the same principle as the feathers of Onaga Kanzaki Swine. In other words, the Onaga Kanzaki Sword is born out with almost the same thing as "True Black" that human beings realized with the latest carbon nanotechnology.

The reason why the members of the Bird of the Family family have such characteristics is to make the "decorative feathers" more beautiful. As a result of evolving to attract females and to leave their descendants by emphasizing beauty by having vivid blue or yellow decorative feathers in the invisible icy black, or as such As a result of survival of individuals with characteristics, birds with feathers of this special structure exist in this world.