A giant robot that a person of aqueduct heavy industry can ride and maneuver "Cratas"WhenThe battle of the century which remains in the history of gigantic robotsThe two robots that played "Iron Glory (MK 2)" and "Eagle Prime (MK 3)". Megabots who developed these are planning to hold a tournament game where more giant robots are invited to decide the world's strongest huge robot and we are looking for investment on Kickstarter at the cloud funding site.

Megabots who developed a giant robot "Eagle Prime" with a total weight of 12 tons, a total length of 16 feet (about 4.9 meters), and a 430 horsepower person riding and manipulating, and won the game against Claustas. The following article can check the appearance of the battle of the glow of Eclle Prime with Kurasutasu. 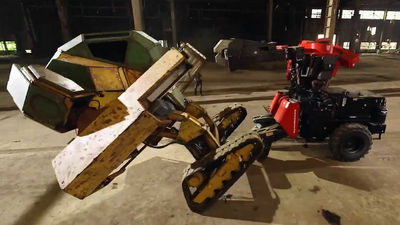 So far Megabots has spent three years on a robot battle with Kratas and a development cost of 6.5 million dollars (about 740 million yen). Also, among the staffs of Megabots are mixed fighting sportsUFCFounder of the popular TV program "Doubtful legend"There are also some staff who worked in, and there are also the best talent to create a new robot battle tournament.

China's "GREATMETAL" which is one of the robot development team that has been dragging the challenge to Megabots. "Monkey King", as the name suggests, is developing a robot that walks quadrupedly like a monkey. Megabots seems to have received a challenge from more than 20 robot development teams in China, Japan, South Korea, Canada, Australia and the United States, but before deciding whether to actually participate in the convention, And that. In addition, if the contribution exceeds the target amount, Megabots is planning to move towards the realization of the robot battle tournament, open source of Iron Glory's design drawing, allowing more people around the world to participate in the battle, We are also planning to accelerate the development of huge robots. The robot battle tournament will be held in the Bay Area of ​​San Francisco, USA in the fourth quarter of 2018, and four teams are planning to battle. If the team is not ready or if you can not use the arena that will be the venue, you may change the date and time of the event.

The movies seeking contributions to Mobabots' robot battle tournament are as follows.