It spilled in 2016Panama documentFollowing on, the powerful people and rich people in the world have plenty of assets in tax havens "Paradise documentIt became clear from. In the Paradise document, the name of Queen Elizabeth 's personal asset, the investor Wilbur Ross who was appointed Commerce Secretary by the President of Trump, is followed by a name, but also the name of Apple that has been accused of tax avoidance for some time. The International Searching Journalists Association (ICIJ) has disclosed how Apple is escaping tax payment. The claim that "Apple is escaping taxes" is not new, and in 2013 Tim Cook told Senator Carl Levin at the Senate Senate Hearing at the time "You are going to have a goose laying golden eggs I moved to Ireland, I moved three companies to Ireland which does not need to pay taxes "" It is not right "," We are paying taxes to be paid without missing 1 dollar I do not rely on tax evasion, I do not secretly store it on the Caribbean island. "

Apple was criticized from a long time since it was said that it was taking a tax avoidance method "double Irish". Tax evasion is not illegal, unlike tax evasion,Tax HavenCorporate tax called corporate tax at zero or very low placePaper CompanyYou can lower the amount of tax payment by putting such as.

In Double Irish, Apple makes two corporations in Ireland. The first company is a paper company, it is positioned as a subsidiary of the American headquarters, and it plays the role of licensing only. In this state, the Irish government is taxed, so this time we will transfer the subsidiary's control and control division to the outside. Ireland has legal loopholes, and if the controlling and controlling department is outside the country Irish tax law will not be taxed. And by setting the destination to transfer the administrative control division to tax haven, we realized the tax saving scheme. By adopting the above method, there is also a year that Apple 's tax rate on overseas profit fell to 2%.

It is from around 2014 that the voice that Apple is receiving preferential treatment from the Irish government has grown bigger. Cook's criticism of the US tax system in 2015, "on the point that Apple is building sophisticated methods to escape taxes" is "a completely absurd political point out"I am commenting..

However, as the EU's investigation progressed, the EU ordered Apple to pay up to EUR 13 billion (about 1.7 trillion yen) on the period between 2003 and 2013 in 2016. In response, Apple and the Irish government have appealed. Details on this background are summarized in the following article.

What is the background of Apple being ordered to pay taxes of 1.6 trillion yen as a tax benefit in Ireland? - GIGAZINE 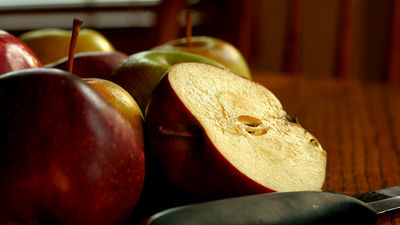 The newly spilled "Paradise Document" is a South German newspaper acquiring the material managed by Apple 's "Appleby" law firm located on the island of Jersey, and news organizations around the world including BBC and The Guardian participate It was revealed in cooperation with the International Research Reporting Journalist Coalition (ICIJ). And Apple was the name of the customer included in the leaked material.

A few months after Cook CEO denied tax evasion in the US Senate Hearing in 2013, the Irish Government decided not to allow companies founded in the country to remain tax - free without citizenship. According to the content revealed by Appleby's article, Apple is supposed to start looking for a tax avoidance area that changes to Ireland after this.

In March 2014 Apple's legal counsel Baker & McKenzie sent 14 questions to Appleby for 14 questions about the Cayman Islands, the British Virgin Islands, the Bermuda Islands and so on. One of the questions included contents such as "Please confirm whether the company in Ireland can do the management activities ... without being taxed in your jurisdiction". Also, Apple said that he wanted to know that on the spot "on the futuristic future it is likely that the law will be changed in an inconvenient way".

Ultimately, Apple decided to use Jersey without tax for the interests of many corporations.

Among the leaked materials includes e-mails sent to colleagues by Cameron Adelie, who is an officer of Applebee Corporate Division, and the e-mail includes "I am sure Apple is very sensitive to the public eye To unknown people ...... They said that the work to be done for them wishes to be discussed only among "those who need to know". In addition, Mr. Adalie described as "a great opportunity for us to shine on international standards" about receiving Baker & McKenzie's request. In mid-2014, the Irish government will undergo international pressure and begin considering the law prohibiting double-iris. Apple used Jersey for doing double island, but of course it will not be possible for Apple to show its opposition to this move. However, many people have expressed their opposition, and Mr. Michelle Noonan, Irish Finance Minister, warns in July 2014, "The ban on double-Irish structure must be cautious".

And in October 2014, Mr. Noonn announced that it will not apply the scheme of double Irish from January 2015 to new entrants. However, for companies that have already applied double-Irish, it is said that the application until 2020 will be accepted.

Apple was able to reschedule tax avoidance, including "Apple Sales International (ASI)" and "Apple Operations International (AOI)" in Ireland since 2015. Actually, the media did not draw attention, but in the announcement of Mr. Noonan in 2014, it contained content of "a generous tax system for companies that bring intangible assets to Ireland." This means that capital deduction is allowed when Irish companies purchase expensive intangible assets. With this mechanism, Irish companies will be able to use tax saving schemes by purchasing intangible assets from group companies located in foreign tax-havens.

It is not certain whether Apple used the above scheme. However, ICIJ says that Apple is forcing the majority of the $ 252 billion (about 28.7 trillion yen) tax-free overseas profit into Jersey. In addition, Ireland's GDP in 2015 has increased by 26%, and the media companies point out that this reason is that the intangible assets were sold to companies in Ireland from outside the country. Ireland's intangible asset increased by 27 billion dollars (about 3 trillion yen) in the same year.

In addition, Apple has issued a statement on tax payment on November 6, 2017. The contents of the presentation are as follows.

· Apple changed the structure of the company in 2015 to keep tax payment to the US and not to reduce taxes elsewhere. There is no fact that there was operation or investment from Ireland.
· Apart from the US, Apple pays the billions of dollars taxes to the UK at a tax rate of 35% which is stipulated on the asset revenue.
· Apple's effective tax rate on overseas earnings is 21%. This can be easily calculated from publicly available materials. This tax rate has been consistent for many years.

In addition to the above, Apple is the world's largest taxpayer who paid over $ 35 billion (about 4 trillion yen) over the past three years, most of Apple products design, development and engineering in the US We are aware that most of the taxes are paid to the US, Apple noted that in the 1980's Steve Jobs picked up Ireland as a base for overseas operations and that operations in Ireland are taking place It is.