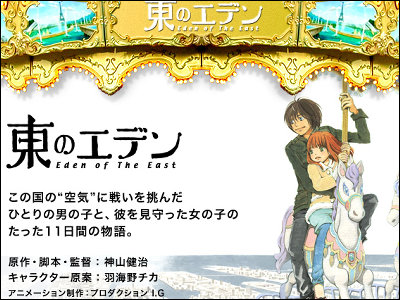 Written and directed by Kenji Kamiyama of Ghost in the Shell: Stand Alone Complex series with characters designed by popular manga artist Chica Umino of Honey and Clover, TV anime "Eden of the East" aired from April 2009 was one of the most successful titles of this spring's anime season.

A movie version to come next winter was announced from the beginning of the project, but recently some new details came out. Apparently, it's going to be a duology.

The second movie "Eden of the East: The Movie II - Paradise Lost" is to open in January, 2010.