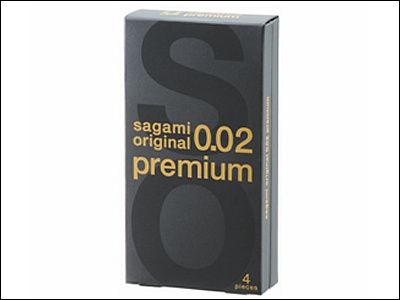 Recently we've reported the release of Mega Big Boy, one of the biggest condoms in the world by Okamoto.

This time Sagami Rubber Industries, the first condom manufacturer in Japan and Okamoto's archrival, is introducing a luxury brand of condom "Sagami Original 0.02 Premium". According to Sagami it would be the thinnest and most expensive condom in the world, to be released on no other than the Valentine's Day.

Released on Feb. 14th at the price of 2100 yen (approx. 23 USD, including tax) for a 4pcs box. Admittedly it is quite expensive, more than five dollars a shot, but it might be a good idea for lovebirds to enjoy the extravagance on special occasions like Valentine's Day, to make up for the cut in expensive gifts and dinners due to the state of economy these days.