I have eaten 'Spam Avocado Burger' of Freshness Burger, which wraps salty spam with fried eggs and avocado mellowly As the hamburger chain

Freshness Burger celebrates its 30th anniversary in December 2022, the `` Spam Burger '', which was a regular burger from 2007 to 2021 and was very popular with the staff, will be released on November 16, 2022 ( From Wednesday) to November 29th (Tuesday), it will be on sale again for a limited period of two weeks. This time I went to eat because there is also a ' spam avocado burger ' with a new avocado added.

Released today ???? # Spam Burger
With gratitude from Freshness Burger, which celebrates its 30th anniversary, there have been many requests for the revival of the 'Spam® Burger', which has been #revived for a limited time .

Spam® avocado burger with an arrangement also joins the ranks ☺

Spam Burger has appeared in Freshness Burger since 2007 as the only product that has received official approval as a burger using 'Spam' sold by Hormel Foods. At the time of the 25th anniversary menu renewal of Freshness Burger in 2017, a campaign was held to survive because it was the worst regular in the sales ranking and survived, but sales ended in 2021. This is a limited time revival. Negi Miso Burger ”, which was a regular menu at the time of its founding. We ordered a spam burger and a spam avocado burger. The diameter of the buns is almost the same as the long side of the transportation IC card, an orthodox size. When you remove the upper buns and fried eggs, a huge thick-sliced spam is settled. The cross section looks like this. When you eat it, the spam's saltiness is wrapped in the yolk of the soft-boiled egg, giving it a mild taste, just the right amount. There is plenty of shredded cabbage with a crunchy texture, and it is enough to eat. Spam's strong saltiness is followed by the mellow flavor of a fried egg that envelops it, followed by the creamy, rich flavor of avocado. Each fried egg is slightly different in how it is baked, so it seems that the impression of the overall taste of the burger will change considerably depending on whether the yolk is soft-boiled or not. 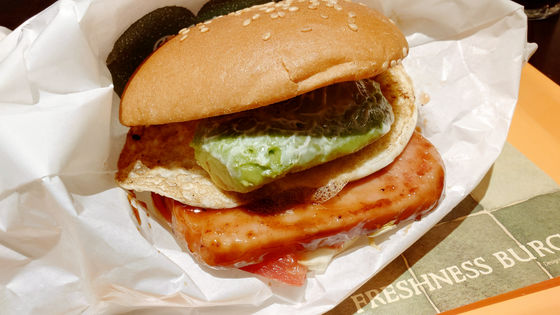