What is NASA's oxygen generator 'MOXIE' that finally started operation on Mars? 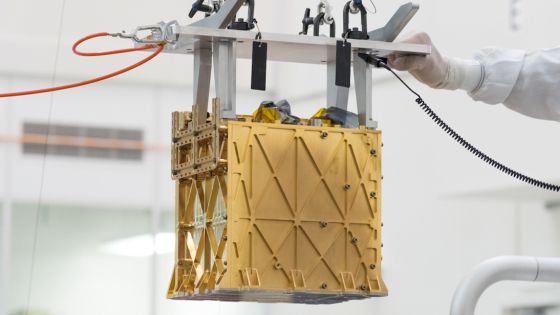 Mars has an environment relatively close to the earth in the solar system, and is attracting attention as a destination for human migration. In order to produce oxygen on such Mars, a briefcase-sized device ' MOXIE ' has been developed by NASA, and has already begun to generate oxygen on Mars.

The oxygen generator MOXIE was put into Mars together with the Mars unmanned probe 'Perseverance'. In addition to MOXIE, Perseverance is equipped with a high-definition camera and a rock collector, etc., and has been transmitting various data to Earth since it started operating on Mars. An overview of the missions Perseverance is working on can be found in the article below. The appearance of MOXIE installed in such Perseverance is as follows. The size is 23.9 cm × 23.9 cm × 30.9 cm and the weight is 17.1 kg. Mars' atmosphere contains only 0.13% oxygen, making it unsuitable for human life. Also, considering the distance between Earth and Mars, the method of ``bringing oxygen from Earth to act on Mars'' is unrealistic. NASA, which is aiming for manned exploration on Mars in the future, has developed MOXIE so that oxygen can be generated locally. MOXIE collects carbon dioxide from the Martian atmosphere, heats it to about 800 degrees Celsius, and then decomposes it into oxygen and carbon monoxide to generate the oxygen necessary for human activity. MOXIE has generated a total of 49.9g of oxygen seven times in 2021. 'Oxygen production by MOXIE is the first demonstration of using a resource from a planet other than Earth to chemically transform it into a substance useful to humans,' said Geoffrey Hoffman, MOXIE Deputy Principal Investigator. It is,' he said, appealing the results of MOXIE.

In addition, MOXIE running on Mars at the time of writing the article is a small model for testing, and in order to actually generate the oxygen required for a long-term mission, MOXIE of 100 times larger size is required.