How long will the HDD keep working? It is well known that HDDs have a limited lifespan and can eventually break after many years of use. Backblaze, which publishes HDD failure rate statistics every year, picked up 10 types of HDDs used in its own data center and calculated the failure rate in order to find out how many years the HDD will operate.

Backblaze sets out the annual failure rate of HDDs every year, but this time we changed the viewpoint and calculated the 'lifetime' of HDDs. 'For example, it is academically interesting to know that the annual failure rate of a washing machine is 4%, but what we really want to know is,'How long can we expect to have a new washing machine?' That's what it is, 'he said, applying this to HDDs and collecting statistics.

The HDDs picked up by Backblaze were 10 models made by Seagate, HGST, and Toshiba, and were compared by dividing them into 4 types: 4TB, 8TB, 12TB, and 14TB. In addition to the statistics, the Kaplan-Meier curve shows the expected occupancy rate for each elapsed month. Backblaze refers to its own data from 2013 to 2022.

◆ 4TB
The record of 4TB HDD is as follows. The following two models are said to have been the most numerous 4TB models as of March 31, 2022. 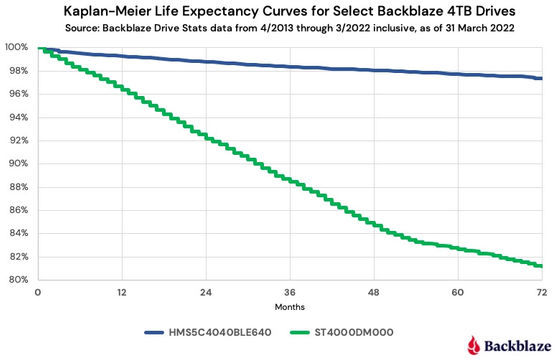 Backblaze said, 'Case closed. It was stupid to buy a Seagate 4TB model.'

The graph looks like this. Approximately 95% of consumer models and 93.6% of enterprise models will continue to operate five years after they are first used. 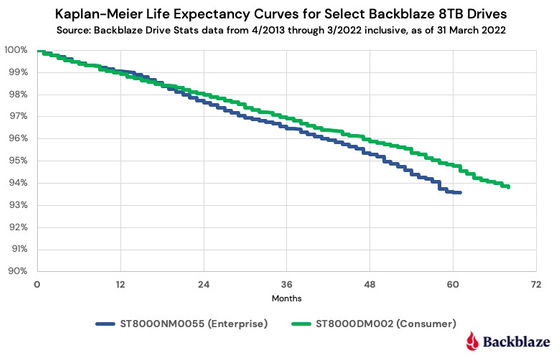 Backblaze said, 'Both HDDs worked well. If you want to buy an 8TB model and a sales person says,'There's a 93.6% chance that it'll still work in five years,' that's a pretty good number. '.

As shown in the graph below, it can be expected that at least 98% of all three models can be used continuously for two years. 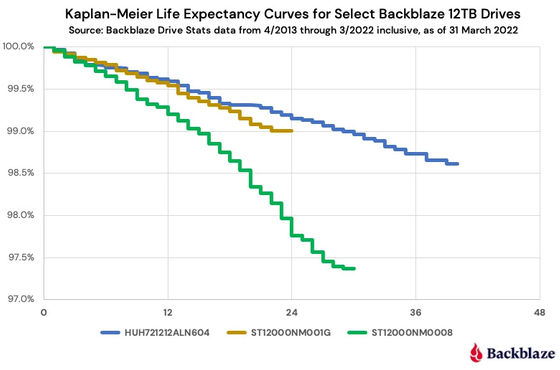 All three models were up and running at 99% one year after they were first used. Backblaze pointed out that the failure rate graph over time should normally draw a bathtub-like curve , but the Toshiba model has a failure rate one point higher than previously predicted after 36 months. 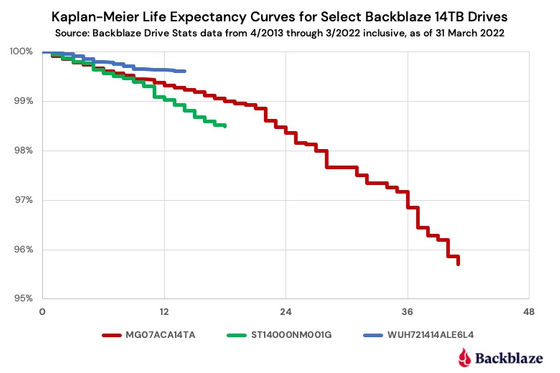