BackBlaze, which regularly publishes statistical data on the failure rate of HDDs used in its own data centers, has released data for the first quarter of 2022 (January to March). Overall, the models by manufacturer that demonstrate the best performance recognized by BackBlaze are as follows.
・ HGST 12TB '

In addition to the above statistics, BackBlaze picked up and graphed HDDs that have been used for more than 1 million days since the first quarter of 2015 when data recording started. The vertical axis is the average number of months used, and the horizontal axis is the annual failure rate. BackBlaze evaluates the models classified in the 1st to 4th quadrants as follows.

・ First quadrant (upper right): Although this model has worked well so far, it is the most promising candidate for replacement given the current high annual failure rate.
Second quadrant (upper left): Proven to be reliable over time, you need to start planning a replacement over time, but don't panic
・ Third quadrant (lower left): Good start, no need to replace
・ Fourth quadrant (lower right): It needs to be replaced if possible, but it is not necessary to hurry if the annual failure rate maintains the current status. However, it wastes data center operational resources. You can check the dataset used this time from the following page. 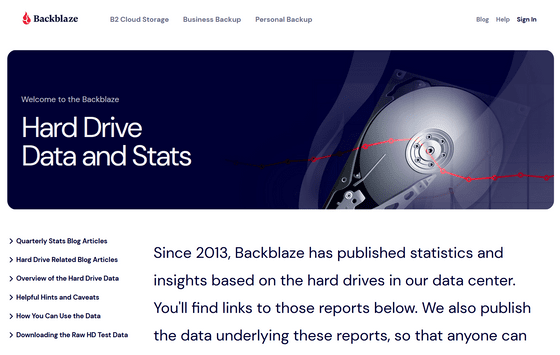