Reported that 'Worldcoin', which issues virtual currency instead of scanning iris data, was scanning poor people without any explanation Worldcoin ' that started a business to issue cryptocurrency tokens instead of having people provide iris data, among the people who provided iris data, 'the tokens are still worthless even after 6 months' The voice of criticism is erupting.

People who donated their eyeballs to Worldcoin feel cheated
https://protos.com/people-who-donated-their-eyeballs-to-worldcoin-feel-cheated/

Worldcoin was founded by entrepreneur Sam Altman, co-founder of startup-investing company Y Combinator and CEO of AI research organization OpenAI . Worldcoin created a system 'Orb' that scans the iris to generate a hash from biometric data and provides the virtual currency 'Worldcoin' in exchange for this hash, and actually collected iris data from many people. ..

Worldcoin emphasizes safety by stating that 'iris data is scanned to generate a hash and then deleted on the spot so that the hash is not associated with an individual.'

However, Worldcoin is reportedly in a state where it has not been able to issue any virtual currency even though it has already scanned the iris data of 500,000 people. The company said, 'It takes longer than expected to issue currency, so we are aiming for the second half of 2022,' and there are criticisms that the target is vague. 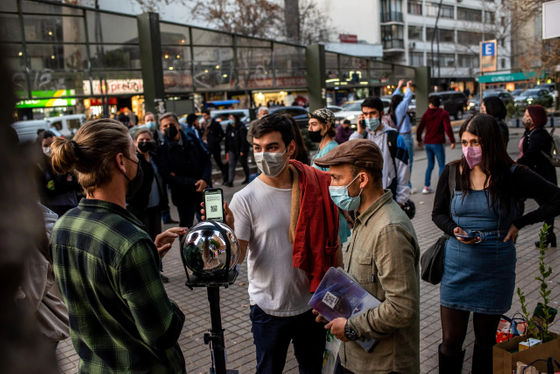 The people who provided the iris data have been complaining about the fact that they will never receive the currency. The person who provided the data at the beginning of the launch claimed that 'initially $ 20 worth of tokens were promised to be issued within two years, and an additional 10% was to be paid in advance.' However, since the currency has not been issued after 6 months, the tokens in possession remain worthless.

A 35-year-old man who is self-employed in Indonesia said, 'One morning, when I was awakened by my mother and followed me, a strange technology company was giving out'social aid prizes' at a nearby elementary school. I joined the long line without knowing it, and when it was my turn, I was looking at the metal ball, and when it was over, I got a ticket with a number. It seems that the company was giving out money. However, he did not tell me what kind of social assistance it was, 'he said, expressing his distrust in the activities of Worldcoin. In this way, Worldcoin was visited not only in one place, but in Indonesia alone, more than 20 places. Worldcoin often distributed local currency in cash in return for scans, or distributed Worldcoin tokens and AirPods , but little information about 'what to use the data for' was revealed to the locals. It was said that. The MIT Technology Review, which investigated this, said, 'Worldcoin has been able to gain meaningful understanding from its providers through deceptive marketing, even though it has collected more personal data than is allowed. It turns out that this was not the case. This action may violate the European Union's General Data Protection Regulation (GDPR) and local law. '

Worldcoin is trying to provide cryptocurrencies to people all over the world with the goal of 'improving world poverty'. The company admits that it collects data by distributing goods and asking local governments for cooperation, but there are few cases where the person in charge was detained by local police authorities. matter.

Worldcoinhas been accused of 'catalogizing the eyeballs ' and 'it is doubtful whether Worldcoin's behavior of getting consent from people was correctly understood by people from different countries and languages.' The opinion of the expert is received.