Our deepest thanks to everyone who joined us in supporting humanitarian relief efforts for people affected by the war in Ukraine.

Together with the Fortnite community and @Xbox , we raised $ 144 million USD for @DirectRelief @UNICEF , @WFP , @Refugees and @WCKitchen . Pic.twitter.com/lPAa8lmfJn

Epic Games has raised $ 144 million for Ukraine since March 21 and will donate it to charity --Neowin
https://www.neowin.net/news/epic-games-has-raised-144-million-for-ukraine-since-march-21-and-will-donate-it-to-charity/

Fortnite raised $ 144 million from a project to 'send all two weeks of revenue to humanitarian aid to Ukraine.' Epic Games, which runs Fortnite, 'will use all of Fortnite's revenue from March 20, 2022 to April 3, 2022 to help those affected by the war in Ukraine.' Was announced. 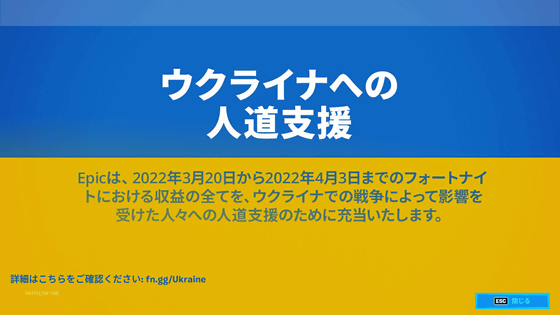 The funds were used for net sales of in-game currency V-Bucks purchased in real currency, Fortnite Crew, a monthly subscription service, Battle Pass for gifts, and visual packs. Microsoft, which provides Fortnite at the Microsoft Store, is also participating in this project, and the net sales of Fortnite-related content purchased at the Microsoft Store during the same period were donated.

In addition to Epic Games, many game-related companies are implementing projects to support Ukraine, and League of Legends (LoL) Riot Games has bundled games for $ 5.4 million (about 662 million yen). Humble Bundle, which sells assorted sets, has raised $ 20 million, and the Ukrainian support bundle sold on the game bundle platform itch.io is also $ 6 million. We have achieved sales exceeding (yen).

Support money of over 1.5 billion yen will be collected by 'a game assortment set that can support Ukraine if you buy it' --GIGAZINE