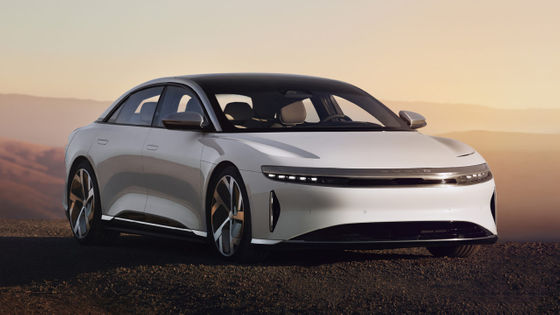 At the developer conference

◆ NVIDIA DRIVE Hyperion 9
The hardware architecture 'Hyperion 9' for self-driving cars will appear on the open development platform 'NVIDIA DRIVE' for self-driving cars provided by NVIDIA. Hyperion 9, which is the successor to Hyperion 8 that realizes autonomous driving using sensors such as 360-degree cameras, radar, LiDAR , and ultrasonic sensors, has 14 cameras, 9 radars, and 3 LiDARs. , 20 ultrasonic sensors are installed, which can process twice as much sensor data as Hyperion 8. By using the existing SoC '

DRIVE Atlan ' for self-driving cars, Hyperion 9 demonstrates more than double the performance with the same power. In addition to Level 4 autonomous driving, it can handle the convenient and secure features offered by the NVIDIA DRIVE Concierge. By incorporating a rich sensor set and high-performance computing, the entire system is designed for the highest level of functional safety and cyber security. NVIDIA explains, 'Hyperion is the nervous system, Atlan is the brain.' The Hyperion 9 will go into production in 2026.

◆ NVIDIA DRIVE Map
By 2024, the NVIDIA DRIVE Map, which maps 500,000 km of major roads in North America, Europe and Asia, has been announced. With DRIVE Map equipped with three localization layers of camera, LiDAR, and radar, the world is reproduced very accurately in 3D, and the information necessary for cutting-edge AI is supplied. You can use multiple layers to localize cars, pedestrians, and moving objects, load them into NVIDIA Omniverse , and build vehicles that realistically respond to traffic conditions based on that data. The map will be expanded by millions of passenger cars and the data will be available throughout the self-driving car industry. ◆ Market expansion of 11 billion dollars (about 1.33 trillion yen)
It was announced that Hyperion has been adopted by startups such as DeepRoute, Pegasus, UPower and WeRide, and that the ecosystem surrounding Hyperion has grown to over $ 11 billion. In addition,

BYD , a major Chinese battery maker, has adopted the central computer 'Drive Orin' for vehicles that realizes 254 TOPS , and has a large number of sales records such as the world's first plug-in hybrid car ' F3DM '. It was shown that the ecosystem for achieving Level 4 is expanding, such as building the next-generation EV with Hyperion 8.