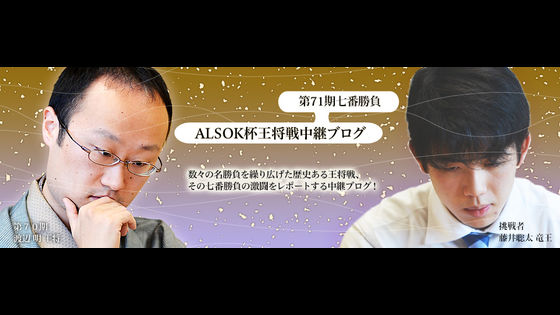 The challenger Fujii at the 4th station of the 71st ALSOK Cup Osho War (sponsored by Mainichi Shimbun and Sports Nippon Shimbun) held on February 11th (Fri) and 12th (Sat), 2022. King Souta Ryuo defeated General Watanabe and won the throne. Ryuo Fujii was 19 years and 6 months old and was the youngest to win the throne. In addition, we achieved the 'five crowns', the fourth person in history, at the youngest age.

The right to challenge the 'Ohsho' is determined by a league match of 7 players, including the 4 players who lost the previous game and the remaining players in the challenger decision league (Ohsho League), and 3 who passed the second qualifying round. This 'Osho League' is known as one of the most difficult challenges in the shogi world, as only the top four players can remain.

Osho Watanabe seized the throne from Yasumitsu Sato 9th Dan in the 62nd Osho War in 2012. In 2014 (64th term), Masataka Goda lost the challenge of Kudan, but in 2018 (68th term), he became a challenger again and defeated Toshiaki Kubo Kudan in a straight line.

In the seventh game, which started in January 2022, Ryuo Fujii rushed into the 4th station with three wins first. From the first day of the battle, the battle rushed into the battle at a speed that could be described as 'I don't think it's a two-day game.'

The first day ends with Ryuo Fujii closing the 72nd move. On the second day, the game resumed from the sealed '△ 7 six steps'.

Around the 80th move, Ryuo Fujii made a horse while Osho Watanabe tried to attack with a rook, and the situation became slightly dominant.

The state of the impression battle will be broadcast live below.


Ryuo Fujii achieved the fourth crown in history by acquiring the king following Kisei, the throne, Eiou, and Ryuo. Previously, the youngest achievement record was 22 years and 10 months by Yoshiharu Habu Kudan, but it will be achieved at 19 years and 6 months, which is more than 3 years earlier. By the way, there are three people who have achieved the five crowns in the past: Yasuharu Oyama, Fifteenth Master, Makoto Nakahara, Sixteenth Master, and Yoshiharu Habu, Kudan (qualified nineteenth master).

King Watanabe is now retreated to the double crown of the master Kiou.

In addition, the fifth match of the Kiou match Konami Group Cup (sponsored by Kyodo News) began on February 6, 2022, and in the first station, Kiou Watanabe has defeated Takuya Nagase. The second station will be held on February 19th.

In addition, the final station of the 80th ranking match still remains, but as a result of the A-class 8th station held on February 4, Shintaro Saito Hachidan has been decided as a challenger to the master Watanabe. Ryuo Fujii belongs to Class B 1 group, and this term is 9 wins and 2 losses. The battle for promotion with Akira Inaba 8th Dan and Shota Chida 8th Dan depends on the result of the final round.