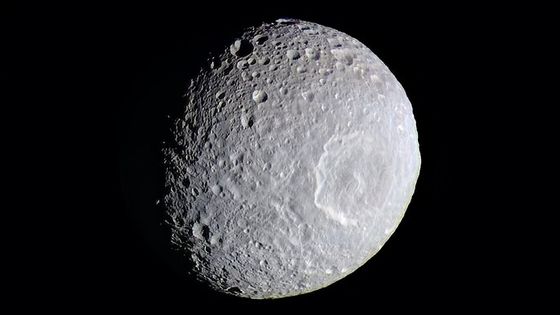 The Galactic Empire space fortress ' Death Star ' that appears in the movie Star Wars series is a huge astronomical military space station. It has been pointed out that Saturn's first satellite, Mimas , which is said to resemble the Death Star, may have a 'liquid sea under the ice.'

The case for an ocean-bearing Mimas from tidal heating analysis --ScienceDirect
https://www.sciencedirect.com/science/article/abs/pii/S0019103521005091

Discovered in 1798, Saturn's first satellite, Mimas, is a celestial body with a diameter of about 400 km, and there are many craters and canyons on its surface. The largest crater in Mimas, Herschel, has a diameter of about 130km, the height of the peripheral wall is about 5km, the depth of the bottom is about 10km, and the height of the hill in the center of the crater is about 6km.

Such Mimas is said to be 'similar to the military space station' Death Star 'appearing in the Star Wars series,' and is pointed out that 'the thermal image (heat distribution map) is similar to Pac-Man.' I am. NASA has also created an image associated with the story 'Mimas resembles the Death Star.' As for Mimas, it is known from the observation data of the Saturn probe Cassini launched by NASA and others that it is performing an oscillating motion called libration. Since it is difficult to explain the libration of Mimas only by its own orbital motion, it has been pointed out that 'Isn't there a sea inside Mimas?'

However, there is a counterargument that 'if there is a sea inside, cracks should be seen in the ice on the surface of Mimas due to the tidal force ', and there is a theory that libration may be due to another factor. .. 'Planets with internal oceans, such as Enceladus and Europa , show surface cracks and other geological signs,' said Alicia Roden, a geophysicist at the Southwest Institute in the United States.

Therefore, Roden et al.'S research team created a model to investigate whether tidal heating, which warms the inside of Mimas by gravitational interaction with Saturn, can have a liquid sea inside without destroying the ice on the surface. .. Then, analysis using a tidal heating model revealed that Mimas can maintain liquid water inside while holding ice with a thickness of 24-31 km on the surface. Roden argues that this scenario is not a special adjustment, it is a realistic scenario in terms of the stability of the ice shell, and it is consistent with the observations of libration. ..

'The fact that Mimas has a sea represents the existence of a new type of'stealth'ocean world where the sea does not leak from the surface,' Roden said. 'After all, the surface of Mimas is me. Our new understanding has greatly expanded the definition of a 'potentially habitable world.' That is, if there is a sea in Mimas, whose surface is covered with ice and shows no signs of geology such as cracks, there is much more water and life supported by water in the solar system than previously assumed. There is a possibility of doing so. This discovery has the potential to make Mimas a promising target for future exploration. 'While these results support the existence of the ocean in Mimas, it is a formidable theme to align Mimas's orbital and geological features with our current understanding of thermal and orbital evolution,' Roden said. He argued that Mimas's research is an attractive research target for understanding the habitable marine satellites that exist on Saturn and Tenno.