AI talk software 'COEIROINK' that automatically synthesizes character voices for free makes it super easy for anyone to create 'voices' for creations. 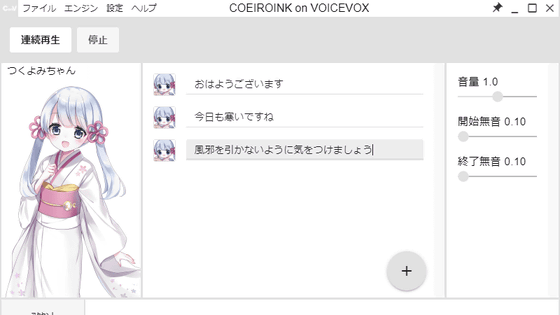 Sand tiger shark's AI talk software for Windows that Mr. developed as a hobby 'COEIROINK (Koeiroinku)' has been published for free. COEIROINK is unnecessary and commercial use also OK free material Character Contact Tsukuyomi-no-Mikoto-chan Since it is possible to get anyone to easily read aloud your favorite text, the self-made animation and voice drama of character voice, narration of live video and commentary videos It is useful for creating such as.

The first is ' # Tsukuyomi-chan '!
Commercial use OK! You can also specify an accent! pic.twitter.com/REziDZ7LYo

COEIROINK is a talk software for Windows, and two types, 'COEIROINK-CP' which is a CPU version and 'COEIROINK-GPU' which is a GPU version, are distributed free of charge from the following page. The GPU version works on a PC equipped with an NVIDIA GPU, and it works faster than the CPU version. If you want to actively support the development of software, you can purchase the same development support as the free version for 100 yen including tax + additional amount.

This time, download the free version of COEIRO INK-GPU. In the GPU version, the link is divided into 4 files, but this is related to the capacity that can be uploaded to BOOTH. All files are in ZIP format, and the GPU version has file sizes of 1000MB, 1000MB, 512MB, and 201KB, respectively. The CPU version has 3 files. 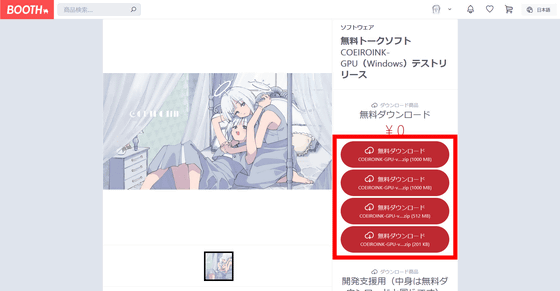 software such as Explzh , the 4 files will appear as shown below, so start 'COEIROINK-GPU-v0.1.0.exe'. 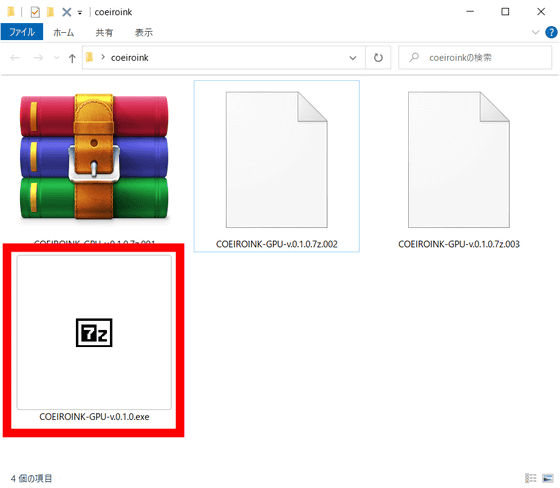 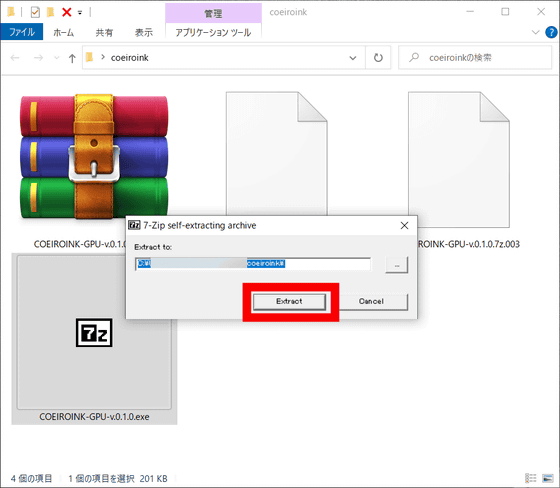 When the decompression is completed, a folder called 'COEIROINK-GPU-v0.1.0' will be created. Double-click it to open it. 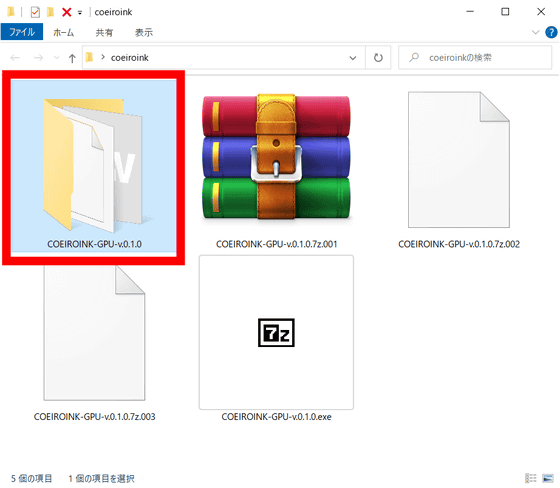 Start 'COEIROINKonVOICEVOX.exe' in the folder. 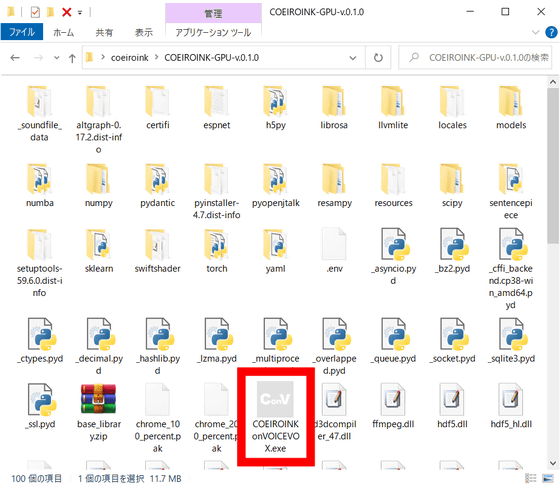 At startup, you need to wait a bit for the speech synthesis engine to start. 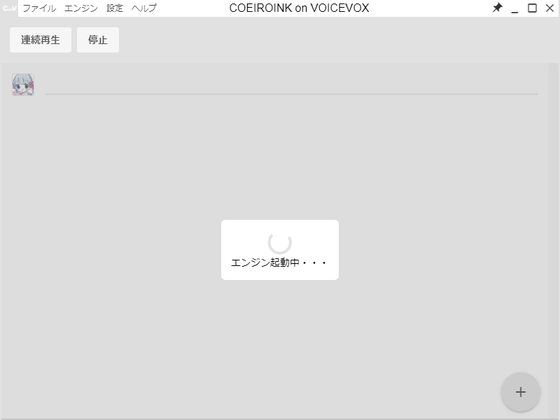 Ready when the speech synthesis engine starts. Click the + icon at the bottom right. 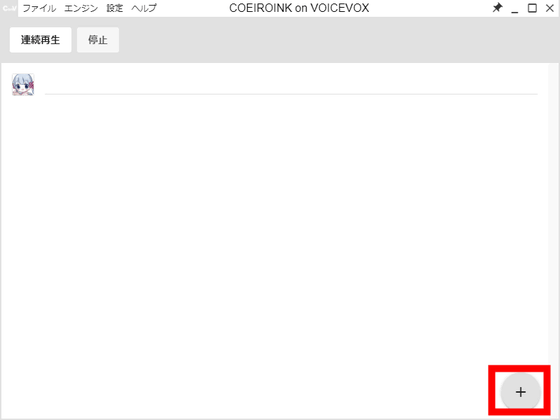 According to Mr. Shirowani, COEIROINK uses the UI of the automatic voice synthesis software ' 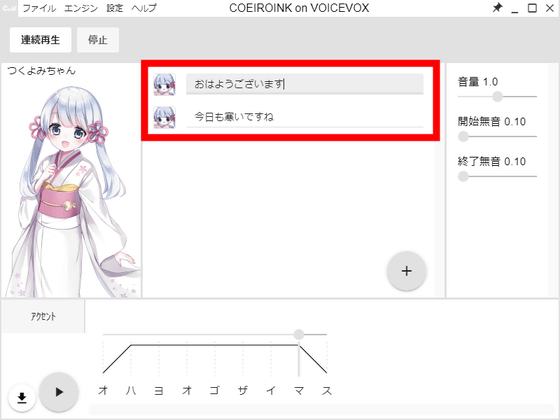 Select a line and click the play button at the bottom left to play the synthesized voice. If you click 'Continuous Play' on the upper left, all the lines will be read out in order from the top. 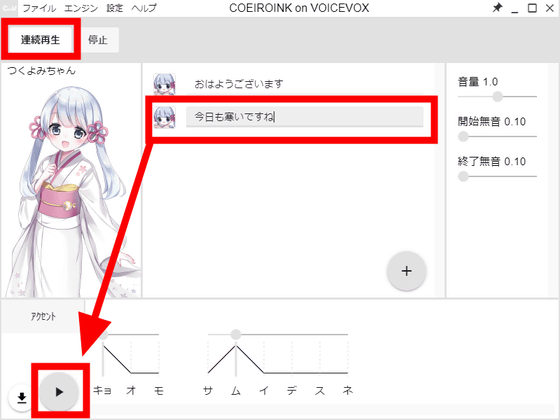 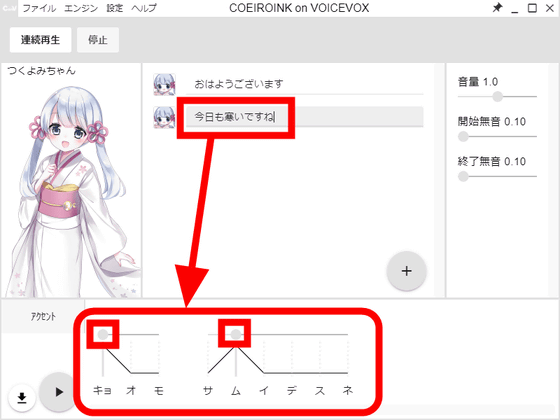 Then, select the line and click the download icon at the bottom left to save the voice synthesized in WAV format at hand. 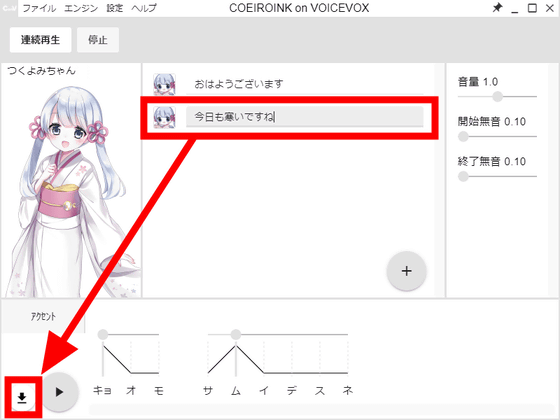 If you want to add a line, click the + icon at the bottom right of the center column to add a new input field. 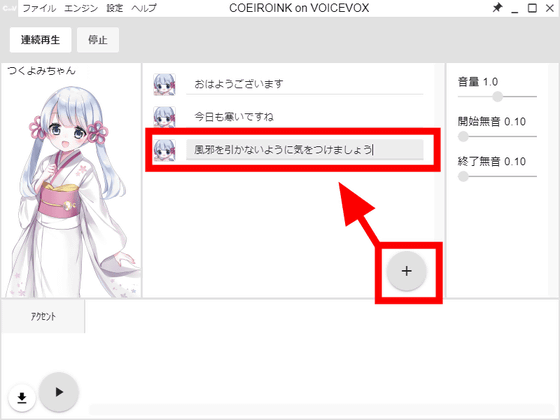 The following movie is where Tsukuyomi-chan read out the voice that was actually input. You can pronounce 'su' at the end of 'good morning' without vowels, or 'today' as 'kyo' o 'mo', and read it out in a fairly natural way without any adjustment. You can see that it will give you.

I used 'COEIROINK', a software that can synthesize character voices very easily --YouTube


The motivation for developing COEIROINK, how to use it easily, and why the UI of VOICEVOX was used are explained in the following movie released by Mr. Shirowani.

According to Mr. Shirowani, COEIROINK was developed with the desire to create talk software that anyone can easily use, rather than character-based talk software. Initially, COEIROINK was a program that did not have a GUI and only operated with code, but it seems that he used the UI of VOICEVOX after receiving advice from Mr. Hiho. However, COEIROINK's speech synthesis method is completely different from VOICEVOX. Sand tiger shark says it is aiming for an unofficial plug-in for VOICE VOX. Also, in the future, it seems that individuals want to be able to add voices that can be used for COEIROINK by creating voices for COEIROINK and registering them on the official website together with the terms of use for each voice.

In addition, COEIROINK has terms of use. It is said that it is OK for commercial use, but COEIROINK's Tsukuyomi-chan voice must be written on the credit of the work.