Is a 'battery-powered train' realistic? Japanese government as 'subsidies to buyers of electric vehicles (EV) to the current 2-fold' in 2021 November 22,

were determined in this manner, movement toward de-carbon society is in progress on a global scale I am. An American research team has announced a study on the theme of 'Is it possible to realize a'battery-powered train'?'

Can we use big batteries to power our trains? | Ars Technica
https://arstechnica.com/science/2021/11/can-we-run-our-trains-using-big-batteries/

As the name 'train' suggests, trains that can be generally boarded in Japan are driven by electricity supplied from the overhead wire of the pantograph on the roof. However, some freight vehicles that transport luggage are powered by internal combustion engines such as diesel engines, and most of the freight vehicles in the United States are diesel locomotives , emitting 35 million tons of CO2 annually and 6.5 billion. It is estimated to cause health hazards worth dollars (about 750 billion yen).

Nowadays, when the transition to a carbon-free society is required, it is natural that electrification is also required for railway vehicles. However, the method of laying a pantograph like Japan involves enormous initial costs and maintenance costs in the United States, which has a large land area, so the team of Mr. Amor Padkey and others of Berkeley National Research Institute is considering `` It's a train with a huge battery attached. ' Most of the existing diesel locomotives in the United States are driven by the method of 'turning a generator with a diesel engine to generate electric power and driving the motor with that power', so just switching the wiring 'generator with a diesel engine' There is a possibility that the part of 'turning to generate electric power' can be replaced with a battery. Based on the premise that a typical freight train in the United States travels an average of 241 km a day, Padke et al. I made a trial calculation. As a result,

In addition, this estimation also reveals the merits of replacing the current diesel engine with an iron phosphate-based lithium battery. In the case of an iron phosphate-based lithium battery, the power can be directly converted to the power of the motor, so the power consumption can be reduced by half and the refueling time required for a diesel engine can be shortened. This is due to the fact that the power supply time of the battery is faster than that of refueling, and that if the power supply takes too long, the method of 'replace the battery itself' can be adopted. 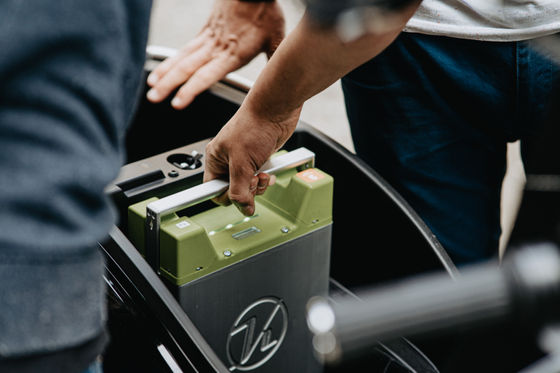 On the other hand, if you move to a battery, of course, there will be a large initial cost. Mr. Padkey and others are also making estimates on the cost side, and it is said that the result can vary greatly depending on the price of gasoline and the frequency of battery charging, but the initial investment to switch to the battery alone is $ 15 billion (about 1.7200). Although it costs 100 billion yen, it saves 44 billion dollars (about 5.6 trillion yen) when the air pollution reduced by the battery is taken into consideration, and 94 billion dollars (about 5.6 trillion yen) when the reduction of CO2 emissions is taken into consideration. It is said that it will save 10.82 trillion yen). Batteries are expected to be more efficient in the future, but the 2021 estimates show that they are more economical than internal combustion engines.

Purdkey et al. Also mention the diversion of large train batteries. The railroad company's move to batteries means that the railroad company owns a large number of oversized batteries. Therefore, there is a possibility that this group of batteries can be used to supply electricity to the disaster area in the event of a disaster, or to make a profit by means of 'buying electricity during the time when the electricity price is low and selling it during the time when the electricity price is high'. According to Padkey et al., If you run a power resale business in the Texas market, you may be able to make a profit to recover the initial cost of the battery in one year.