The sewerage system, where domestic wastewater and factory wastewater flow in, requires regular inspections and repairs of aging areas. Inspection is quite costly. In the United States, where the development of aging infrastructure is an issue, attempts are being made to address sewerage problems by introducing robots and AI that utilize the latest technology.

Inside the sewer where drainage and rainwater flow, oils and filth that have been washed away with the drainage, toilet paper, and waste such as wet wipes and disposable diapers that should not be washed away form a mass called 'Fatberg ', which is clogged or toxic gas. Is causing a problem .

Artificially created sewers deteriorate over time and must be regularly maintained and repaired. If a sewer pipe that has reached the end of its life is left as it is, it will not be able to cope with heavy rain caused by climate change, and it will not be able to comply with strict regulations for environmental protection. In addition, if the sewer system fails, it may cause environmental problems such as the spread of infectious diseases, floods, and pollution of rivers, lakes, and the sea due to the overflow of sewage.

However, it is difficult to inspect sewers with piles of filth and Fatberg, and many of the 875,000 miles (about 1.39 million km) of sewer pipes in the underground space of the United States are repaired or replaced on a large scale. The time has passed significantly. According to a survey by the American Civil Engineering Society , total spending related to drainage infrastructure in the United States in 2019 was $ 48 billion, but the total spending required is $ 129 billion (about 14 trillion yen). It is 680 billion yen), and it seems that the budget is not enough for 81 billion dollars (about 9.22 trillion yen). It is known that many local governments that cannot keep up with the development of sewerage have violated the Water Purification Law enacted in 1972. Therefore, businesses that undertake inspection and repair services for cities and sewers are trying to reduce the cost of sewer maintenance by using drones that can fly in the sewer, robots that can move in the sewer, and AI.

Flyability, a venture company that develops drone aircraft specialized in the inspection field, is developing a drone with collision resistance that can fly in the sewer. Flyability drone operator Charles Rey said he investigated the underground sewers in Europe, Asia and the Americas, and drones in the sewers built during the Song dynasty that existed in China between 960 and 1279. He said that he skipped and found a staircase that was unknown until now. Of course, the sewerage system in the United States is newer than Song, but it seems that the whole picture of the drainage system buried underground is often unknown.

Deep Trecker , which develops remote-controlled vehicles that can move underwater, was originally founded to search for shipwrecks, but said there was unexpected demand from operators undertaking infrastructure development. At the time of writing the article, many sewerage inspection companies are searching for sewer pipes using remote-controlled vehicles manufactured by Deep Trecker and others. Vehicles that inspect the inside of the sewer must be able to withstand contamination by bacteria, oils and fats, corrosive hydrogen sulfide gas, etc. for several hours a day, and each vehicle costs several million yen. In addition, a system has been developed that uses AI to automatically identify problems, rather than being visually inspected by humans from images from cameras mounted on remote-controlled vehicles. Founded in California in 2019,

Sewer AI, a venture company, sent a video of a sewer inspection to a contracted city to train AI to identify problems with sewer pipes.

The HK Solutions Group, which is in charge of sewerage inspections in more than 150 municipalities in the United States, sends a video of 200,000 feet (about 60 km) of sewer pipes to Sewer AI every month to automatically identify and track problems. Michael Ingham, CEO of HK Solutions Group, introduced AI to help certified inspectors complete inspections that used to take weeks or months to complete in as little as one day. It states that it has become.

According to Gregory Baird, director of finance for water and sewerage infrastructure in California and Colorado, there is a 20% error rate when human inspectors use remote-controlled vehicles to investigate drainage system problems. That thing. 'Human beings are tired and distracted by something or mice flowing in the water and miss the problem. Looking at the poop in the sewer is not intellectually stimulating, and people sit down and think about the next decade of life. 'It's going to happen,' said Baird, arguing that AI isn't as tired or distracted as humans. 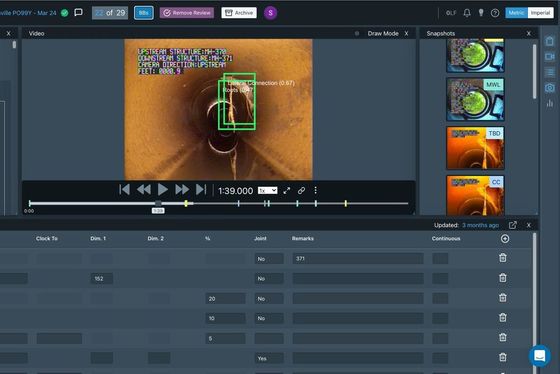 If the sewer pipes managed by the local government can be completely mapped, it will be possible to introduce a 'sewage pipe repair robot' developed by Sewer Robotics based in the Netherlands and repair it without digging up the sewer pipe. .. The Sewer Robotics robot can operate even when water is flowing in the sewer pipe, and it is possible to blow off obstacles such as Fatberg with a water cutter and cover the leaking part with UV-curable plastic to repair it. That thing.

In Europe, there is a movement to introduce the latest technology for the maintenance of sewerage systems, but it seems that the sewerage system in the United States is still in the future. The introduction of robots and AI is expected to enable local governments and contractors to inspect and repair sewers faster and at lower cost than ever before.