If you wear shoes that do not fit the shape of your foot or have sharp points, you may develop a 'bunion' in which your big toe bends inward. This hallux valgus seems to have been popular in medieval England as well, and researchers have announced research results that 'the popularity of pointed shoes as a fashion has dramatically increased the number of people suffering from hallux valgus.' I will.

In England around the 14th century, dresses and shoes using various fabrics and colors showed signs of fashion, and it is believed that fashion styles have changed significantly. One of the most distinctive is the shoes called 'Pooline', which have sharp toes like carrots. The Pooh line was kept in a unique shape by stuffing the toes with moss and wool. Its length sometimes exceeds 10 cm, and there is an anecdote that 'I couldn't walk properly unless I tied it to a string.' It is a special shoe whose practicality was disregarded, but it seems that both men and women wore it from adults to children. 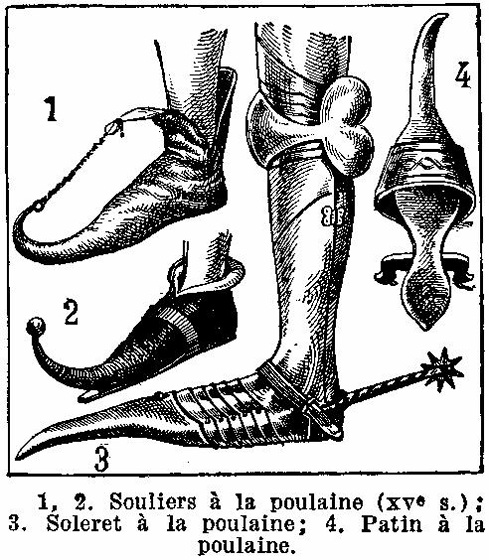 In addition, the most traces of hallux valgus were confirmed in the bones excavated from the monastery, and it was found in 43% of the total, including the person identified as a priest from the relics. On the other hand, about 3% of the bones excavated from the local graveyard had traces, and Dittmer et al. Said, 'From the 13th century to the 14th century, priests choose stylish fashion. It seems that things have increased. '' Also, traces of hallux valgus have revealed a link between poverty and lifestyle. ' In addition, since bones with traces of hallux valgus often showed traces of fractures associated with falls, Dittmer et al. It also shows that he was more likely to have a fracture as a result of the fall. '